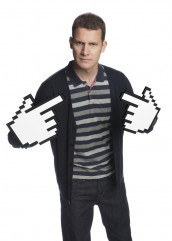 The Comedy Central star begins a new season of his series on January 11, but won't be leaving his show any time soon for an acting career

First THE SOUP took to task talks shows and reality TV, now Daniel Tosh is doing the same for viral web videos with his hit Comedy Central series TOSH.O which begins its third season on January 11.

Setting it apart is Tosh’s ability to poke fun at himself, while also doing self-deprecating skits with the stars of some of these web clips.

“We don’t see ourselves as making fun of people who come on the show,” says executive producer Charlie Siskel speaking at today’s TCA Winter 2011 press tour. “Daniel is always making fun of himself. These people have heard far worse in the comments after their videos have posted. I guess they’re already used to the abuse.”

For Tosh, he says everything is in “good spirit” which is no doubt why the show has become a sensation for Comedy Central.

“I try to say everything in a good spirit,” says Tosh. “I’m not up there preaching. I’ve done stand up solidly for fifteen years. I’ve said whatever I wanted to say. My goal has never been to offend people, but I’m not going to hold back because that might upset somebody.”

With THE SOUP proving to be a breeding ground for hosts turned actors (Joel McHale being the latest alumni), Tosh admits he’s not interested in leaving his show any time soon for a big acting career … or is he?

“I would love to leave Comedy Central,” he says with a smile, “but not any time soon. I’m not a good actor. I can play myself and a much gayer version of myself and that’s the amount of my range. I enjoy creating this show and hopefully get the opportunity to create more shows for Comedy Central.”

Then, Tosh pauses and adds, “I don’t know if someone saw my performance in THE LOVE GURU, but I was Cowboy Hat and I don’t think there’s going to be a sequel to that pile of sh**.”