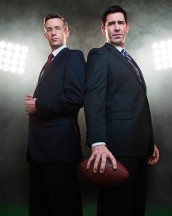 One of the most influential satirical forces has been THE ONION newspaper and website and now Comedy Central is bringing the news organization’s comedic bent to the small screen with ONION SPORTSDOME.

While speaking at today’s TCA Winter Press Tour in Pasadena, CA, executive producer Will Graham says the same team that puts together the online sports web videos, are also part of the new Comedy Central series.

“The same team who are doing the show will also continue to do the web videos also,” says Graham, who notes there won’t be much difference between the two mediums. “There are standards[and practices] you deal with, but I don’t think there’s no joke where ‘oh, we can’t do that.’ It’s just a bigger palette to play with. It’s 22 minutes vs. two to five minutes. It’s great and allows us to make fun of more stuff.”

In terms of timeliness, SPORTSDOME will try to be neutral enough so the show has a repeatability factor, but he admits that they still need to make sure they’re commenting on current events to make the show viable.

“With THE ONION, we do things bigger and broader so things don’t feel old on Wednesday, but I also think part of the fun of the world of sports is how maniacally obsessive people are in terms of an immediate response [to events],” adds Graham.