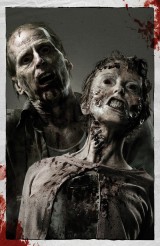 One of the biggest time bomb revelations over the last couple of days, was the news that THE WALKING DEAD executive producer Frank Darabont (and the person instrumental to bringing it to the small screen on AMC) had abruptly left the series in the middle of Season 2. This, of course, was after he appeared at Comic-Con over the weekend promoting the show as if nothing was amiss.

At today’s TCA Summer session with AMC, naturally questions turned to his exit and the details behind it. Joel Stillerman, AMC’s Senior Vice President of Original Programming, Production, and Digital Content didn’t get into details, but this is what he had to say.

Stillerman goes on to say that the show has an “incredibly talented cast, writers’ room and crew’” singling out Emmy-nominated special effects “guru” Greg Nicotero.

“They’re all working incredibly hard to facilitate a seamless transition into the rest of Season 2, and I can report that production is not going to miss a beat and we’re going to make our air date which is … October 16th,” says Stillerman. “I will just say, what I’ve seen and what I see coming down the pike gives me great confidence. We’re going to take what we started last year, which we were pretty happy about and really move it to the next level. It’s going to be an incredible season of THE WALKING DEAD.”

And in talking about Darabont, Stillerman had this to say.

“I want to take a second and say a very heartfelt thank you to executive producer Frank Darabont for the incredible contribution he made to THE WALKING DEAD,” he adds. “He’s a visionary writer and director. He wrote a brilliant pilot. He directed a brilliant pilot. His fingerprints are all over the adaptation of Robert Kirkman’s brilliant source material to the television show that you see and we’re grateful for his contribution.”

“I don’t have much to add to the circumstances of it,” says Stillerman. “I really mean what I say when I say Frank’s contribution to the series was invaluable and he is a brilliant writer-director. I will also say we have full confidence in the team moving forward. Glenn Mazzara is a terrific showrunner. He’s got a lot of great experience. He’s been an integral part of this show from Season 1 and certainly in Season 2. We’re excited to move on, but I don’t have a lot more to add on the circumstance of it.”

As for where Season Two will be heading, Stillerman says it will appeal greatly to the comic book contingent who were fans of the graphic novels.

“There will be a lot you’ll recognize if you’re a fan and follower of the book, but you know, one of the things we set out to do from day one, and one of the things that Robert Kirkman has been adamant about is that we take some twists and turns,” adds Stillerman. “For those of you who were comparing and contrasting the books and the show, you’ll note that the fabulously talented John Bernthal, who plays Shane, is still alive. That was probably slightly unexpected, and we have some equally unexpected twists and turns coming up in Season 2, but a lot of stuff you’ll recognize.”