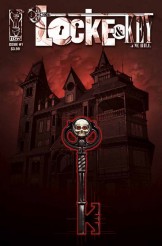 The show will be "scary" says Fox execs

“It’s really cool,” he reveals. “[Robert] Kurtzman and [Roberto] Orci had this property in their back pocket that Joe Hill created. There was a real underlying vision of original property. [Showrunner] Josh Friedman came in  and knocked us out with his vision. It’s a unique piece of material. We like the idea of doing something scary right now”

Fox Entertainment Chairman Peter Rice adds, “at the center of it is a family and we feel it can be accessible, relatable and scary.”

The original intention was to air the series in the summer, but Reilly says they couldn’t get the show up and running in time.

“This would have been a great one for [the summer],” says Reilly. “We couldn’t make the dates. We have it in the hopper for May and then we’ll figure where it would be programmed best from there.”