TCA 2011: Fox says BREAKING IN is still not officially dead 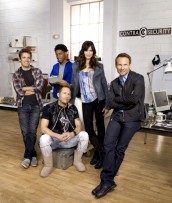 TCA 2011: Fox says BREAKING IN is still not officially dead

When is a show cancelled, but not cancelled?

That’s been the mystery behind the Christian Slater comedy BREAKING IN that did pretty good during midseason this year on Fox after AMERICAN IDOL. It wasn’t enough for it to get an official Season 2 renewal, but in recent months, there’s been movement that could bring the series back.

Recent extensions on cast contracts have showed that the show has a little bit life left in it, and today at the Summer 2011 Television Critics Association Fox session, Fox Entertainment President Kevin Reilly explained that the show could get an official last minute reprieve.

“Stranger things have happened – FAMILY GUY was cancelled once,” says Reilly. “We said at the upfront that we were going to a four comedy block in the Spring. We’re in pre-production on a pilot we’re re-doing, we have I HATE MY TEENAGE DAUGHTER on our schedule. We liked BREAKING IN. We all liked BREAKING IN, but it was a high class problem. There are shows we had to cut this year which would have made it [another year] on other networks. BREAKING IN fell into that camp. We had a very passionate group of producers and actors wanting to keep it going as [the potential] of being part of that four comedy block. It has a shot. We kept it alive. We don’t know what will make up that comedy block, but we will be officially looking at BREAKING IN.”

Article Source: Assignment X
Article: Fox says BREAKING IN is still not dead at the network