Home » TCA 2011: CBS feels THE BIG BANG THEORY will hold its own against AMERICAN IDOL 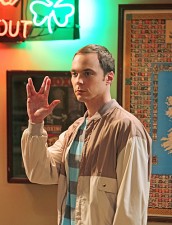 TCA 2011: CBS feels THE BIG BANG THEORY will hold its own against AMERICAN IDOL

“It will be interesting to see the new cast and changes this year [on IDOL],” says Tassler. “It’s a powerhouse. The good part, BIG BANG has been a superstar and we’re thrilled how well its done on Thursday. It has a very loyal audience. I don’t know what’s going to happen. In terms of BIG BANG fans, we know we have the audience there. The good news, anytime you put hit shows in one time period, there’s enough eyeballs to go around. We think we’ll do okay. THE BIG BANG THEORY is a hit show. It’s a big hit for us and we know our fans are going to continue to support our show and be there. It’s not an ‘us’ vs. ‘them’ [thing]. I think there’s enough [ratings] to go around.”