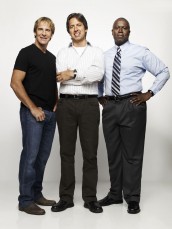 While speaking at the Winter TCA press tour in Pasadena, CA, MEN OF A CERTAIN AGE star Ray Romano spoke glibly about what his wife thinks of his new role.

“Every time she sees me doing a kissing scene, she says, ‘this is bullsh*t, we have enough money,’” he says.

On a more serious note, he says MEN OF A CERTAIN AGE, which returns in the summer, has both a strong female and male audience.

“It’s not just a guy show,” says Romano. “The women are strong characters on the show too. The guys are real, so it’s not just a sophomoric bachelor party show.”