Home » TCA 2011 Exclusive: Specific Details on the HOT IN CLEVELAND/ALL MY CHILDREN crossover 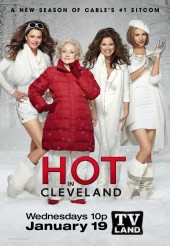 TCA 2011 Exclusive: Specific Details on the HOT IN CLEVELAND/ALL MY CHILDREN crossover

Suzanne Martin, executive producer and show runner of TVLand’s hit series HOT IN CLEVELAND, is in a hurry, but she takes time (at this Winter’s TCA press tour) to answer a few questions about the second season of her show, starring Valerie Bertinelli, Jane Leeves and Wendie Malick as L.A. transplants and the indefatigable Betty White as a Cleveland local.

In addition to having some amazing guest stars from the regulars’ pasts – Mary Tyler Moore and Bonnie Franklin, to name two – this season features a crossover with ALL MY CHILDREN, as Malick’s actress character Victoria Chase lands a role on the ABC soap.

SUZANNE MARTIN: Actually, we’re doing the crossover with ALL MY CHILDREN right now, so we’re in the middle of it.

AX: Just to be clear, ALL MY CHILDREN is a TV show that exists as a TV show in the “real” universe of HOT IN CLEVELAND?

AX: And HOT IN CLEVELAND does not exist in the onscreen universe of ALL MY CHILDREN?

AX: Does Malick play it straight on ALL MY CHILDREN?

MARTIN: That hasn’t been filmed yet, but I think it will be funny. I have to tell you, Susan Lucci is so, so funny, and the two of them together – they out-soap opera actress each other.

AX: Do you usually try to rotate the A story between your four lead actresses, or is it just a matter of what you come up with at the time?

MARTIN: Some of it is what we come up with, but we try to make it so everybody’s doing [something]. I don’t think we do A story/B story – it’s more everybody always has an A story.