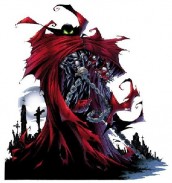 There hasn’t been too much news on the SPAWN reboot movie front in some time, but at today’s San Diego Comic-Con, SPAWN creator Todd McFarlane spoke about the status of the new film.

“We’re just finishing the script and we producers coming in and have a big actor we’re talking too,” adds McFarlane.