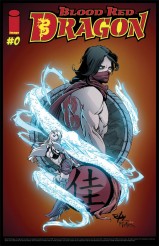 At the 2011 San Diego Comic-Con, they spoke a bit about the project which is scripted by Jon Goff and deals with a new protector of earth dealing with the armies of darkness called Oblivion.

“Yoshiki is a hero like no hero you’ve ever seen before,” says Lee. “He’s a hero who is great rock musician – and a classic musician.”

“We came up with the name BLOOD RED DRAGON,” says Lee. “You see Yoshiki as a mild-manned man, but when justice raises its ugly head, he is terrifying when he’s fighting evil. And Todd, did a really magnificent job. He’s a great artist and a great writer.”

While it might have made sense to do the comic book in the Japanese Manga style, McFarlane says that Yoshiki actually wanted it to be more American, rather than imbue aspects of his own Japanese heritage.

“Many people think Manga is an interesting style and like to bring some of that into our culture, but Yoshiki is the opposite,” explain McFarlane. “He lives in Japan and sees Manga all the time. He’s more interested in the American superhero look. We both have an envy with different comic book art styles, so he wanted more of an American super hero look.”

Click on Link: Todd McFarlane talks about the status of the SPAWN movie reboot