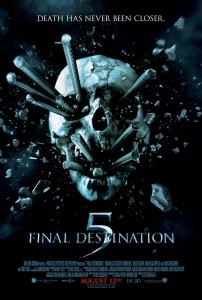 It’s an overcast day in Vancouver, Canada as ASSIGNMENT X visits the set of FINAL DESTINATION 5 – the latest chapter in the successful horror franchise that seems to top itself each time out (the film opens nationwide on Friday).

The December Vancouver haze, certainly adds to the flavor of visiting the set which this time uses a suspension bridge as the catalyst for Death to start picking off victims one by one.

The plot mechanisms are key to each FINAL DESTINATION films (the first one was an airplane crash, the second a freeway pile-up, the third a roller coaster disaster, and the fourth a speedway accident), not the cast, which changes from movie to movie. That keeps the surprise factor ratcheted up.

“I think the formula is very comforting to people, but I do believe it puts the onus on us to come up with a couple of things that might shake it up a little bit,” says Craig Perry who has produced all five films.

The usual plot structure begins with a character having a vision of a horrible accident and those around them dying violent deaths. That person usually stops the inevitable, momentarily, but the rest of the movie finds the unseen force of “Death” coming for these people one-by-one (in wildly inventive ways), in the order they were to be killed in the original vision.

It’s a delicious premise and one that keeps getting refined with each additional film. This time out, Perry even admits they’ve managed to tweak that expected convention even further.

“We all agreed that the previous films had sort of suffered from, at the end, you have someone going, ‘I’m going to fight … an invisible force called Death,’” says Perry with a smile. “However, we’ve actually come up with a clever twist on one of the rules that allows for a little more dramatic interaction amongst the characters which is not only going to make it play better and have more actual narrative thrust to it, but really puts a spin on the entire dynamic for the third act, which is always, I think, you’ll agree, the challenges we face with the franchise.”

The other important difference according to Perry is that “Death”, in whatever unseen supernatural form he’s presented in, makes things more personal this time.

“I think it’s more personal, because we [made an effort] this time around that the characters had wishes, wants and desires of their own – actual storylines of their own that is impacted by this set piece here,” says Perry. “It’s not just people endlessly talking about ‘oh, we’re going to die.’ It’s ‘how did the fact I intercepted with this event, impact the goals I had’ as the movie began. I think the actors responded to that. I think this gave us a chance to have this movie play out with real people, not just archetypes of swimming through the pond of FD. That’s what we were trying to do, giving them all individual storylines and relationships that were impacted from this event and everybody reacts differently to this event because of those relationships.”

The FINAL DESTINATION 5 stages are located at Mammoth Studios just outside of Vancouver in Burnaby, B.C. It’s Day 57 out of 60 and work is being wrapped up on the opening of the movie which takes place on a suspension bridge.
Part of the suspension bridge has been created on these stages, wrapped with a wall of green screen and a gimbal that can gyrate the bridge to make it move on command.

“You say, ‘oh a suspension bridge is not going to collapse,’” says Perry about any doubters of the concept. “And you know what, you go to take a walk on the Lions Gate Bridge [in Vancouver] and when you’re up there and you’re walking across and cars pass, you feel it move beneath your feet,” says Perry. “There’s no eight-foot suicide railings. You’re right there. It’s that fear that makes this sequence work for a lot of people. We’re playing it out to the max. There are some great shots, once all the CG is put in place, you’ll get that watery knee feeling and having seen some of the comps they’re putting together now, I’m very happy. It really does play at that fear of heights which is something we’ve never quite done. Even the roller coaster was speed and being trapped, but this is just about the fear of heights. There are some shots where you can feel the whole audience going, ‘Oh, I don’t feel so good.’

Spearheading the movie is VFX Supervisor Steven Quale who makes his feature film directing debut with FINAL DESTINATION 5 (he previously handled all the visual effects on James Cameron’s AVATAR).

“Steve Quale was literally hired on a Monday like noon and by three, he had already met with a D.P., by Thursday we had hired the D.P., production designer and visual effects supervisor,” explains Perry. “Normally that takes three or four weeks of careful consideration. It was a rushed judgment so we could make this release date and have enough time to prep. You will see, it’s a pretty spectacular, complicated movie.”

Another important thing for Perry was making sure the 3-D had a purpose in the film and was actually SHOT in 3-D, not post-converted which has been a bone of contention with fans. Naturally Quale’s experience with 3-D from working with James Cameron certainly made him a prime candidate to up the ante of the 3-D effects from the previous THE FINAL DESTINATION film.

“I think people are getting tired of 3-D,” says Perry. “Filmmakers are just using it as a cattle prod, making sure the cows go through the proper channels and then the conversion which is just a bastardization of everything. I’m just happy we’re doing this in real 3-D. One of the things we did, to answer your question, is to hire Steve Quale. He knows 3-D left right and center and having worked on AVATAR and having shot movies in 3-D. It’s second nature to him and he has a very good barometer of how to push things. He very much understands how to use the set and use the design of things to block the characters. You feel like you’re present. It’s that immersive quality you’re talking about, but he also doesn’t shy away from the good moments that the audience is hoping are going to be there, and when they’re used sparingly and strategically, they have much more impact. Some of these movies, twenty minutes in [you’re like] ‘okay, I guess they’re going to throw some other s**t in my face. Great.’” 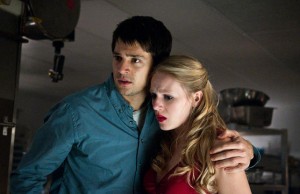 In terms of gore, FINAL DESTINATION 5 will have a similar balance, as with previous films and Perry says the decision of how far to push it always results in endless debates between the filmmakers and the studio.

“We do a variety of different takes, with different levels of gore,” says Perry. “Interestingly enough, the audience in FD2, the [test] audience rejected the movie because of  too much gore. We had to cut back, not because the MPAA wanted to, it was the audience, ‘yeah, it’s too much.’ I thought that was really interesting and it was a real lesson as to why these movies work. ‘Yeah, that’s awesome, we’re going to splatter … etc.’ No, the audience wasn’t responding to that. They wanted something else that was present. That’s part of that large mixing board of how this franchise operates and learning how to set those levels. I think we’ve finally had enough times at bat and gotten the balance right.”

With the fourth movie dubbed THE FINAL DESTINATION, Perry says there was every intent that it would be the last in the franchise.

“There was this sense [last time] of ‘no more, the last hurrah,’ and the movie opened very well, in no small part to Warners marketing,” says Perry. “They did a great job positioning the movie and having the courage to go head-to-head with HALLOWEEN 2 and winning. They really believed in the movie and believed they had a better audience experience on their hands.”

And of course, once the domestic and international totals came in – making the film the most successful installment of the franchise – a fifth one was inevitable.

Another thing Perry has discovered over the run of the franchise is that the audience has gotten more diverse and that women respond even better to the franchise – despite the heavy gore.

“The gore in these films are the punctuation,” says Perry. “It makes these films not only play to the audience, but you see these running on [cable] ad nauseum, because the fun of the movie is the lead-up to that punctuation. It plays to a wider audience than the SAW movies did. It goes beyond that core gore audience. One of the things we learned, even on the last one. When [the woman] is getting the pedicure, [with the] scraping … nothing happens, but [audiences] were like ‘oh my god.’ It was the cheapest trick to do. If you can strategically make sure you deliver those moments, along with that nice splatter people want to see and gore fans want, I think you have a movie that plays in a broader spectrum.”

And Perry adds that this movie will definitely satisfy gore hounds too.

“I think the hard core fans will appreciate some of the stuff we’re doing, because it’s deliciously dirty and hateful, but it’s not going to put off people just going into the movie and knowing the franchise and maybe seeing just one of the previous ones,” says Perry.

Naturally, if FINAL DESTINATION 5 opens to big numbers, it’s a given a sixth installment might be inevitable, and Perry does hint that there’s one story you won’t be seeing in a FD film – a space shuttle.

“Have you ever been on a space shuttle?” Perry asks. “Exactly. How can identity with what that is. You’ve immediately built a barrier between what I think is the fun about these movies which is the take-home factor. After FD2, people were driving the highway, they see a logging truck and they’re like, ‘hmmm.’ You’re never going to have that on a space shuttle.”