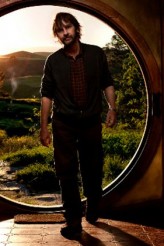 New photos from THE HOBBIT set courtesy of Peter Jackson

With the back-t0-back LORD OF THE RINGS prequels of  THE HOBBIT based on the J.R.R. Tolkien novel (and set 60 years before RINGS)  just starting production in Wellington, New Zealand, co-writer and director Peter Jackson gave fans a gift with two photos from the set.

You can check them out below. Very cool. With Facebook and Twitter making communication super-easy, expect more Jackson updates this way in the future.