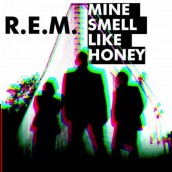 Is the band back to their old jangling ways? This new single is encouraging for their new album COLLAPSE INTO NOW due out in March

It’s been some time since I’ve been excited by a new R.E.M. album. Both 2004’s AROUND THE SUN and 2008’s ACCELERATE promised greatness and a return to form, but were uneven, misshapen releases with few memorable moments.

With their disc COLLAPSE INTO NOW due out March 8, the band has released its first single from that disc “Mine Smell Like Honey” which just hit iTunes and other online retail outlets.

While I’m all for a band exploring new sounds and textures, it felt like the jangly pop roots the band became famous for, gave way to more softer textures over the years,  so it’s refreshing that “Mine Smell Like Honey” finds the band at their jangly rock best.

This is a catchy, foot-tappin’ song, and is one of the best lead-off singles from the group since “What’s the Frequency, Kenneth?” from 1994’s MONSTER.  And with other tracks of COLLAPSE already previewed, it’s clear this is going to be one of their great ones (fingers crossed).

Check out the preview of COLLAPSE INTO NOW below.