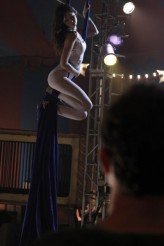 Thomas Kretschmann guest stars as a very entertaining, effective villain in an episode that sheds lights on the pasts of Max, Orwell and the cape (the garment, not the character)

“Kozmo” is a shrewdly constructed episode of THE CAPE, almost as tightly woven as the title object, telling us a lot about several characters and the cape itself, while injecting a note of unexpected mysticism and presenting everybody with immediate threats and moral conundrums.

After Vince (David Lyons) almost goes off the rails dangling one of his attackers from the fateful night at the train yard off a bridge (Vince winds up dropping the guy onto the bed of a passing well-upholstered truck), Chess (James Frain) redoubles his company’s efforts to find the Cape. The result is that Orwell’s (Summer Glau) lair is discovered and trashed, so she has to stay with Vince for awhile, which inevitably leads to her meeting his carny associates. Max (Keith David) can of course tell there’s more to the young woman than meets the eye, but he’s too courteous to press her.

Meanwhile, Gregor the Great (Thomas Kretschmann) performs a Houdini-worthy escape from a Russian prison – that is, if Houdini had a habit of leaving corpses in his wake – and winds up on Max’s doorstep. Gregor was once Max’s protégé and he’s there for his old prop: the cape. Max lies and tells Gregor he doesn’t know where it is. There turns out to be more to this than just helping Vince: Gregor was a talented magician, but the cape, which has a dark and legendary history, made him literally lethal and Max is loath to give such a weapon to a killer. Meanwhile, Chess is searching for his missing daughter.

If you can’t guess where that last plot thread is going (to their credit, the creative team figures you can), you may be highly surprised by the reveal. Otherwise, “Kozmo” is full of good twists and fun cape action. Kretschmann is a great villain because he’s fully mastered the art of playing Gregor as the wronged hero, seeking to take back what is his from those who have stolen it, combining genuine charm and menace in everything he does.

There’s also fun to be had as Orwell meets the gang, though it could have been even better had Vince been allowed a little more participation in the process. The scenes of Vince observing his wife (Jennifer Ferrin) and, in Cape guise, visiting his son (Ryan Wynott) are brief and to the point.

“Kosmo” is a smart, engaging episode that keeps all its elements vivid, active and important to what’s happening.