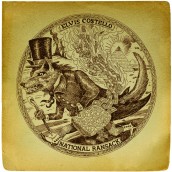 Elvis Costello has always been a prolific artist, and even as his career is going on his fifth decade in the business, he’s still cranking out amazing songs and albums at an accelerated pace (and that’s not counting all the reissues of his older albums with bonus tracks).

Last year, he released his latest effort, the somewhat uneven NATIONAL RANSOM, a hodge podge of tracks that felt like cast-offs from MOMOFUKU and SECRET, PROFANE AND SUGARCANE. It doesn’t mean that it wasn’t any good, it was just stylistically and consistency-wise all over the place.

There were sixteen songs on the album, and now, in a record store exclusive (meaning you can only buy it in record stores), he’s released a four-song E.P. of leftover tracks from RANSOM as a 7” vinyl record.

Those that ordered RANSOM from Costello’s website, got these songs as a download but for $8.99 at a record store (it’s more if you search individual vendors online) you can own NATIONAL RANSACK which is much more cohesive in its abbreviated form.

The tracks are on the folky-side of RANSOM particularly “Poor Borrowed Dress” and “I Don’t Want To Go Home.”

However, it’s on the cover of the 1963 Eddy Raven-penned track “Big Boys Cry” (originally sung by Bobby Charles) that Costello gets to showcase his playful side. He really makes this track soar and it would have been a great addition to RANSOM proper.

The other stand-out track is “Condemned Man” about a man on death row. It’s Costello at his lyrical best and the musical arrangement is moody and ambient the befits the track’s darker side.

Few artists can continue to produce such great songs year after year and still have enough energy leftover to release an E.P. cast-off set that’s as good, if not better than the album sessions it came from, but fans of Costello have known for years that he’s an anomaly in the music industry. He so effortlessly moves from styles and genres, that you never know where he’s going to end up next. And his support of record stores, by releasing this exclusively to them, is a reminder that he hasn’t forgot his roots either.

AGREE? DISAGREE? Let  your voice be heard – COMMENT below