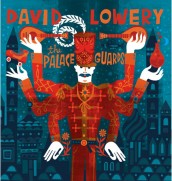 Nine great songs (11, if you search out the two bonus tracks) make for an excellent set of midtempo alternative rock from the Cracker/Camper Van Beethoven frontman

The indie music releases of 2011 has gotten off to an excellent start, with SoCal punkers Social Distortion releasing the great HARD TIMES AND NURSERY RHYMES and now Cracker and Camper Van Beethoven frontman David Lowery releasing a just as potent first solo album.

Lowery makes it clear on his website, this is not an album following the break-up of either of his bands (which he tours with regularly). Instead, it’s simple a side project, which, not surprising, feels very much in synch with the work of both of his excellent groups.

It’s a little softer, more midtempo than his band albums, but it also finds Lowery crafting some incredible new songs – alternatively humorous, touching and downright dark. It’s a great set and at nine tracks and there’s not a bunch of messy filler to muck it up.

“Raise ‘Em Up Honey” kicks off the album finding Lowery getting all Bob Dylan-esque folky with some swell harmonica playing and banjo picking as the song delves into raising up a “brood” of children in the mountains.

“The Palace Guards” is a quirky little ditty while “Deep Oblivion” is a touching song written while Lowery was depressed about the state of making albums and not making money off them with rampant file sharing and illegal downloads (though if that’s what the song is about, you’d be hard pressed to guess that from the offbeat lyrics).

“Ah You Left Me” is more straight forward about the narrator wondering why their love had left them that has a trippy guitar solo which would have made this track fit snugly in the line-up on Cracker’s superb FOREVER disc.

And speaking of Cracker, “Baby, All Those Girls Meant Nothing To Me” kicks the album up a notch with some fuzzy guitars and a little more sass. If any song sounds like Cracker – this one is it. Hope this track gets song radio-play because it’s a winner.

The rest of the album is just as strong from the ambient “I Sold The Arabs The Moon” (which has a Camper Van vibe) and “Marigold” one of the sweetest tracks on this set.

For die-hard Lowery fans, he’s augmented the nine songs with two bonus tracks found on eMusic (“Cages”) and iTunes (“Please Don’t Give It Away”). These aren’t toss-off tracks– they’re just as strong as any of the other songs on the album and worth the extra $2.00 to complete THE PALACE GUARDS experience.

“Cages” is filled with one great line after another, my favorite, “got a job at Bennigan’s/had to shave my back again/one day you’ll be mine” as it talks about releasing animals from the cages and terrorizing people in Griffith Park. Lowery, as always, has a funny way with words.

“Please Don’t Give It Away” is a perfect album closer (if you choose it to be that way) – a perfect slice of bluesy Stones guitar swagger that starts soft and builds big.

While all the songs have their own charms, in the days since I first started listening to the album in heavy rotation, “I Sold The Arabs The Moon” has turned into my favorite by far. A song about shyster selling the “Arabs the moon” and “the English the sea” is filled with clever wordplay, augmented by superior musicianship. It’s an addicting song – one whose layers continually revealed. Great song and the fiddle is gut-wrenchingly sad.

Since the ‘80s, Lowery has proven himself one of the most underrated songsmiths out there. He can alternatively be cruel, sweet and funny – all in same song. He’s never lost this magical touch, and with this solo album, he proves he hasn’t abandoned any of his moxie or edge that’s been displayed so strongly on his Cracker and Camper Van albums.

Hopefully his disillusionment with the state of music doesn’t silence him from creating anymore albums. He’s too good to let downloading freeloaders get the best of him – and there’s an irony in his concern, because you can download a free track off THE PALACE GUARDS by heading over to his official website by CLICKING HERE. You can purchase the album there too.