Movie Review: WE BOUGHT A ZOO 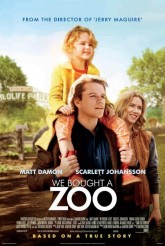 Movie Review: WE BOUGHT A ZOO

There really is a gentleman named Benjamin Mee who wrote a book with the title WE BOUGHT A ZOO about his experiences with the wildlife park in Dartmoor, England, where (according to the film’s credits) he still resides with his two children. The movie entitled WE BOUGHT A ZOO makes us want to read the book to find out what actually happened, because even if it reflects reality in some respects, the film feels like it’s almost entirely invented.

WE BOUGHT A ZOO transplants the action from England to Southern California, where Benjamin (Matt Damon) is mourning the death of his wife Katherine and trying to raise his two children, resentful teen Dylan (Colin Ford) and adorable seven-year-old Rosie (Maggie Elizabeth Jones). When Dylan is expelled from school and the neighbors are too noisy once again, Benjamin decides the best thing for all of them is to make a new start somewhere more rural. He finds the perfect house on a large plot of land. There’s a catch – the house and land come with a private zoo, currently being cared for by the state. Anyone who buys one must buy the other. Benjamin, despite the horrified protests of his brother Duncan (Thomas Haden Church), purchases the property. Benjamin then meets the small but determined zoo staff, headed up by keeper Kelly Foster (Scarlett Johansson), whose young cousin Lily (Elle Fanning) makes quite an impression on Dylan and vice-versa.

What follows is a movie where the filmmakers seem at odds with their subject matter. Director Cameron Crowe and his co-screenwriter Aline Brosh McKenna try to make something of the travails of running a small zoo on not very much money, but their interest apparently lies with repairing the father/son relationship between Benjamin and Dylan, and in showing how Benjamin recuperates from losing Katherine. There are a few problems with this, starting with a lack of anything especially new or even affecting to say on the subject. When (spoiler alert for those who go to very few family movies) Benjamin and Dylan finally reach an understanding, we’re happy not because we believe in the characters and have felt their pain, but because it means the griping and sniping will stop.

As for the depiction of a small, private zoo, where to begin? WE BOUGHT A ZOO never mentions the debate about such establishments (controversial long before this year’s tragedy in Ohio), but if the filmmakers feel it doesn’t warrant comment, fair enough. Their depiction of the place, however, is fairly jaw-dropping. For a family that becomes entranced with exotic animals, none of the Mees seem to have any sort of attachment to their household dog. Nothing bad happens to the dog, but nobody seems to notice he’s there, either. We are told that the zoo’s designer (Angus Macfadyen, entertaining as a man trying to contain his temper) is an innovator. We might feel better if we knew a little more about his work. The animal enclosures may be completely safe, but what we see around the predator environments are low walls that look easy to jump over, moats that can be waded through without getting one’s ankles wet and one-strand wire fences that appear like they could be knocked over by a bear’s sneeze, much less a determined escape attempt. If these really are secure barriers, we’d like to have Macfadyen’s character explain how they work. When a safety inspector (John Michael Higgins) shows up, he’s meant to be a spoilsport bureaucrat; instead, we’re inclined to applaud his restraint in not shrieking in horror at the apparent lack of precautions.

There’s also a seeming lack of continuity. The entire purchase of the zoo is due to the legal condition mandating that the animals come with the land, yet when it seems that Benjamin won’t be able to pay for the place’s upkeep, he is threatened with having the property sold out from under him for the land, with the animals to be dispersed and perhaps destroyed. We can’t tell if some exposition is missing or whether nobody cared about the discrepancy.

Of course, the above wouldn’t matter if we were drawn into the story by emotion, by humor or even by the spectacle of beautiful animals, but because WE BOUGHT A ZOO is so hell-bent on really deep down being about family without having anything to say that requires this framework, we pay more attention to details than we otherwise might. The result is something that’s hard to buy on almost every level.