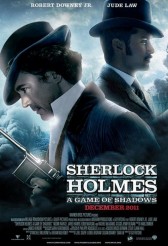 I am serious (more or less), and stop calling me Shirley

Let’s get the big question out of the way at the top – yes, SHERLOCK HOLMES: A GAME OF SHADOWS is an improvement on its 2009 predecessor. The new film brings back Robert Downey Jr. as Sir Arthur Conan Doyle’s beloved creation, nineteenth-century London sleuth Sherlock Holmes, with Jude Law reprising his role as Holmes’ sidekick/chronicler Dr. John Watson and Guy Ritchie returning as director. This time around, however, the script is credited to a sole writing team, Michele Mulroney & Kieran Mulroney, rather than to multiple individuals. As a likely consequence, the story has more coherence and drive, Holmes gets to show off his deductive skills rather more often and little bits that seem to be brief jokes turn out to be major plot points down the line.

While GAME isn’t an AIRPLANE!-like farce – although the above quote is appropriate – the tone is fairly playful, despite all the flying bodies, bullets and blades. As in the last film, Holmes is upset that Watson is abandoning him for married life with Watson’s intended, Mary (Kelly Reilly). Instead of a bachelor party, Holmes drags Watson along on one last investigation, convinced that Professor James Moriarty (Jared Watson), “the Napoleon of Crime,” is up to something big. Holmes of course is right, but he doesn’t reckon with the lengths to which Moriarty will go to punish the detective for his curiosity. Sadly but loyally, Holmes gets Watson to his wedding on time. Then Holmes leaves, prepared to spend his career alone – until Moriarty threatens to kill the newlywed Watsons. Watson is at first furious, but when he learns of Moriarty’s diabolical scheme that will plunge the world into chaos (not to mention Moriarty’s attempt to kill Mary), he reteams with Holmes.

Downey is endlessly entertaining doing pretty much anything, and his Holmes remains utterly watchable. He can be both subtle and outrageous in the same moment, making Holmes vulnerable, selfish, observant, distracted and generally making us believe that this man is as extraordinary as advertised. Law is a strong foil and Noomi Rapace is commendably gritty and capable as a gypsy with a personal stake in the case. Reilly is allowed to give Mary some toughness as well, and she gets to show off great comic timing in a scene with Stephen Fry.

As for Harris, he blessedly is not doing an overblown Bondian villain, but instead simply a very intelligent man with a motive that’s understandable, given that Moriarty is a complete sociopath. He and Downey come off as well-matched adversaries.

Anyone who has seen any of Ritchie’s films knows that the director stages wonderful action sequences and he doesn’t disappoint here, using speeded-up and slowed-down images for maximum dramatic impact. He and the writers also maintain a good sense of drollness, yet allow us to like and care about the characters. This time, there’s also a mystery that lets us play along to a much greater extent than the earlier edition did.

One curious aspect of GAME – which gives hope to the possibilities within big-budget action films, if one is looking for this sort of thing – is that it comes closer to being a gay romance than anything in this genre within memory. Sherlock (teasingly called “Sherley” by his older brother) feels absolutely betrayed by Watson’s marriage. Then, when Moriarty manipulates Holmes by threatening Watson (and knows to threaten Watson in the first place), Holmes doesn’t behave as though his best bud is in danger or as though this is a threat to his honor – he behaves as though characters traditionally behave when their loved ones are in danger.

For good measure, there’s a scene in which Holmes and Watson grapple with one another in a fight where they’re interrupted in a very compromising position. Unlike the previous HOLMES film, this time around, nobody feels any great need to assert Sherlock’s heterosexuality – Rapace’s character is an ally, not a love interest. All of the above isn’t done in a way that is liable to offend anyone who doesn’t like the implications, but the heart of the film is the bond between Holmes and Watson.

At 129 minutes, GAME is a bit on the long side. There aren’t any individual sequences that seem like they should be excised, but one can see where a few trims might have been made. Then again, some of the scenes are genuinely thrilling, with some okay-how-does-he-get-out-of-this moments. There’s also a nicely chilling bit where Moriarty demonstrates both power and forethought by clearing out a room to prevent an associate from feeling safe in a crowd.

SHERLOCK HOLMES: A GAME OF SHADOWS isn’t a definitive Sherlock Holmes film by any means, nor is it a reinvention (a la Steven Moffat’s current SHERLOCK TV series). Even so, it’s good action fun based in character, with strong performances and a depiction of unshakeable friendship that has some visceral heft to it.