Home » Movie Review: RISE OF THE PLANET OF THE APES 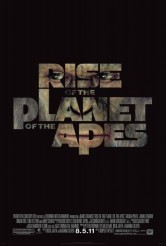 The original 1968 PLANET OF THE APES, based on Pierre Boulle’s novel, has been referenced, ripped off and used as a touchstone for so many different things in so many ways that, for many people, the movie is like a word that gets repeated so often it loses its meaning. For others, though, the film and its sequels remain sturdy science fiction, effectively character-driven, with allegorical aspects that seem heavy-handed now but that were downright transgressive in their day. Furthermore, at a time when movie sequels were mostly like the James Bond franchise, each practically independent of its predecessors, the APES films were serialized, with events in each installment laying the groundwork for the next.

At the end of ESCAPE FROM THE PLANET OF THE APES, the third film in the series, two intelligent, articulate chimpanzees from the future are the parents of a baby. The parents are murdered, but the baby is secretly left in the care of a sympathetic human, which sets up CONQUEST OF THE PLANET OF THE APES. In CONQUEST, the now-grown intelligent chimpanzee, Caesar (Roddy McDowall), finds himself and other apes – now domesticated and being used as slave labor – treated so badly that he leads a violent rebellion. CONQUEST does something with the audience’s sympathies that few other movies have attempted before or since: in a war between apes and humans, it asks us to root for the downfall of our own species.

RISE OF THE PLANET OF THE APES borrows a good deal from PLANET and the other APES sequels, but it is essentially a retelling of CONQUEST. In some respects, it’s great, but it seems a little wishy-washy at the center, perhaps because even though this is still Caesar’s story, the main character here is the human Dr. Will Rodman, played by James Franco.

In this version, scripted by Rick Jaffa & Amanda Silver, the infant Caesar is the child of a wild ape-turned-lab animal. Experiments designed to cure Alzheimer’s in humans render Caesar’s mother highly intelligent, a trait she genetically passes on to her baby. Through a series of unfortunate events, Caesar’s mother is killed and the infant winds up being secretly taken home from the lab by Will, who lives with his father Charles (John Lithgow). Will brings up Caesar as something like his a son, as the chimpanzee is far brighter than a human child of the same age – soon Caesar, played as a teen/adult by Andy Serkis in motion capture, is communicating via sign language. Eventually, though, there are more problems and Will is forced to turn Caesar over to a primate sanctuary, where Caesar is treated like an animal for the first time in his life. Not surprisingly, he hates it. He also finds that he has fellow feeling for his less-erudite brethren and he eventually comes up with a plan that will help the other primate sanctuary inmates quickly become smarter, which in turn will allow them to seize their freedom.

There is a great deal going on in the film, including a through-line with Lithgow, who is deeply affecting as Will’s dad. Serkis gives a performance of extraordinary range and feeling as Caesar. Serkis makes Caesar’s sense of incomprehension and heartbreak when Will leaves him in the sanctuary is heartbreaking to witness and his determination, once he figures out how to lead, makes him heroic.

Director Rupert Wyatt does a strong job with the action sequences, with the eventual massive clash between apes and armed humans playing out as tense and fierce and sprawling. He also keeps up a pretty good pace, save in some moments of romance between Will and veterinarian Caroline Aranha (Frieda Pinto), which feel obligatory. However, there are some big suspensions of disbelief, well beyond accepting a modern-day revolt of intelligent apes. Bad enough that Caroline feels the need to lecture Will about how full-grown chimpanzees become uncontrollable, but the film almost derails itself early on when we have to accept that neither Will nor his primary ape handler (Tyler Labine) noticed that their primary test subject was pregnant. Wouldn’t this have shown up in the ape’s many blood tests (not to mention her physical appearance)?

There’s also a matter of the movie being wishy-washy when it comes to the real-world issue of medical research on primates. The original films mostly bypassed tackling this issue head-on, but depending on one’s reading of the allegory, they were essentially against it. Consequently, Will never takes much of a stand either way. Since he’s theoretically our main character, it seems like we should get some sense of where he stands on Caesar’s bloody crusade to save other apes, but at the end, we don’t get any sense of Will feeling that there may be some sort of schism with him accepting Caesar as his foster son, yet subjecting other similar beings to close confinement, vivisection and death. Unlike CONQUEST’s supporting human characters, who chose one side or the other, Will is oddly passive in the face of what’s happening around him. There are ways to dramatize someone being paralyzed by indecision, but Will doesn’t seem aware that it behooves him to make one.

The adult apes of all species are impressively realized in both design and motion-capture performance (baby Caesar’s eyes are a little off, making him look a little like Chris Van Allsburgh artwork). There are also irresistible references to the older APES films in everything from action sequences (there’s a bit with a fire hose that will resonate) and dialogue to tiny bits, like young Caesar making a Statue of Liberty model. Character names are also welcome tips of the hat. There are also references to a spacecraft lost while on a mission, setting up the situation referenced in the film’s title.

RISE OF THE PLANET OF THE APES is a mixed bag. It has some aspects that are glorious in their own right, some that lead to a big payoff and some that fizzle out. It is frustrating in places, but overall, it’s entertaining and even somewhat moving.