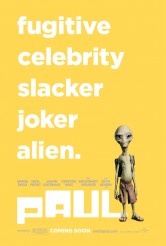 It’s rare a comedy comes around that’s as delightfully original and laugh-out loud funny as PAUL.

Written by Nick Frost and Simon Pegg (who have previously teamed up as actors in SHAUN OF THE DEAD and HOT FUZZ), it’s a very meta-take on what would happen if two geeky nubs came across an actual alien while traveling cross-country in America.

In this case, those nubs are English – Graeme Willy (Pegg) and Clive Gollings (Frost) who have just attended Comic-Con (hilariously recreated) and are now hitting all the alien hot spots from Area 51 to Roswell, New Mexico.

However, their plans are disrupted when they run into an extraterrestrial named Paul (voiced by Seth Rogen) who has just escaped from Area 51 after several decades under lock and key. He’s provided the government (and even Steven Spielberg) with all his secrets and now they want to dissect him and is on the run.

Along the way, this trio comes across a whole bunch of strange characters including a religious freak named Ruth (Kristen Wigg) whose views change once she mind-melds with Paul.

The end result is a chaotic and crazy joy ride of comedy. Some of it is designed strictly for the geeks in the audience, but there’s also enough nods to classic sci-fi that most mainstream audiences will get a laugh out of some of the jokes as well.

PAUL is nicely directed by Greg Mottola who previously helmed SUPERBAD and brings the same kind of manic energy to the proceedings here. There’s also some of the softer undertones of his terribly underrated ADVENTURELAND.

The cast is game, with Pegg and Frost oozing a natural camaraderie we’ve seen before in their previous team-ups and it’s even more refined here. Wiig is hilarious, getting many of the best lines in the movie (she also proves to be strangely endearing too). And Rogen, who is just voicing the alien Paul, is actually quite good making us forget at times that this is merely a CGI creation spouting his words.

PAUL is one of the best R rated comedies to come out since THE 40-YEAR OLD VIRGIN. It’s vulgar, but not too much and it takes clever story detours along the way that work solely because of the strong cast Mottola has assembled. This is the kind of comedy studios used to make in the late ‘70s and early 1980s (ANIMAL HOUSE, THE BLUES BROTHERS) which didn’t worry about being politically correct and focused solely on delivering the laughs.