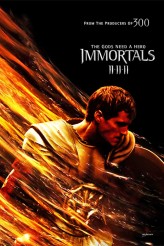 Doing Greek mythology on screen is tough – witness last year’s CLASH OF THE TITANS remake, which was very loosely based on the Perseus/Medusa myth. With IMMORTALS, writers Vlas & Charlie Parlapanides and director Tarsem Singh go off into the wild CGI never-never, using the names of various Greek gods plus the hero Theseus and some Titans to put together an altogether new story. Unless one still worships the old Greek gods, nobody is likely to take offense at this reconfiguration on principle. The problem is that the new tale never feels like it’s going anywhere. There is some amazing imagery, but it doesn’t serve to get us invested in what it shows us.

Theseus (Henry Cavill) is a Hellenic villager who fights better than any of the local soldiers, despite his peasant status. He is advised and trained by a kindly old man (John Hurt) – who turns out to be the Earthly disguise of the god Zeus (Luke Evans). Zeus has decreed that the other gods, whom he rules and has fathered, must not interfere in human affairs unless/until the antagonistic Titans are freed from their eternal prison. King Hyperion (Mickey Rourke), royally angry with the gods for not saving his family from disease, seeks to release the Titans by getting his hands on a magical bow that was lost when the gods and Titans made war upon each other. In order to find the bow, Hyperion captures four priestesses, hoping that one is the Virgin Oracle (Frieda Pinto) who can tell him the weapon’s present location. Hyperion also leads his men in a raid on Theseus’ village, which results in Theseus being imprisoned by Hyperion.

The above paragraph covers roughly the first third of the movie, which feels about as choppy as its description. We are told rather than shown what it is that Theseus needs to learn in order to become a great leader. Then he seems to have absorbed the lesson without going through anything that would teach it to him. Hyperion has several speeches that would seem to point to him planning to have sex with as many women as possible in order to populate the Earth with his offspring, yet he seems to kill fertile females right and left, and it’s unclear what his policy is so far as the reproductive rights of his own soldiers. Although Zeus explains his rationale in not wanting the other gods to help humans, it doesn’t fit the circumstances even before it becomes wildly counter-productive. Almost everything that might help us invest in these people gets stifled before it has a chance to work.

There is also the matter of the film’s look. Director Singh has a gift for imagery, so that many frames look as though they could be glowing illustrations in a book or even paintings. However, while the 3D here is superb in terms of depth, the backgrounds consistently look like CGI work and the sets (including exteriors) look like they’ve been constructed for the film, rather than like environments where people live their lives.

There are some great creepy notions, like having the Titans scuttle around like cockroaches and the climactic battle sequences, both human on human and god on Titan, are full of vigor and spectacle. Some other visuals, like a near-final one depicting the range of mythology, are really wonderful. Then again, there are details, like strange headgear on many characters, which almost yank us through the fourth wall. Most of the dialogue is no help.

This said, Cavill is suitably game, heroic and attractive as Theseus. Pinto as the sought-after prophetess is flawlessly lovely and projects warmth, and Evans finds some real heart in regal Zeus. Rourke shows some restraint in playing the odious Hyperion.

IMMORTALS is worth seeing for a number of striking tableaux. It just doesn’t feel much like a movie – it’s not cheesy enough to be an old-fashioned sword and sandals flick and it’s not consistent enough to effectively appeal to contemporary emotions.