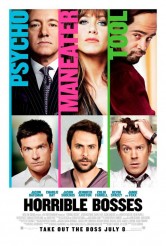 A reasonably funny riff on STRANGERS ON A TRAIN

Just in case you don’t remember STRANGERS ON A TRAIN, the 1951 Alfred Hitchcock movie based on the Patricia Highsmith novel, HORRIBLE BOSSES provides a name check. If you have that confused with the 1987 parody version, THROW MOMMA FROM THE TRAIN, that gets name-checked as well, with a helpful differentiation between the two provided. In other words, director Seth Gordon and writers Michael Markowitz and John Francis Daley (yes, Dr. Sweets on BONES) & Jonathan Goldstein, working from Markowitz’s story, are very clear about HORRIBLE BOSSES’ inspirations. In this outing, however, rather than somebody wanting to get rid of family members or love interests, the scheme is (per the title) to bump off intolerable employers. Furthermore, there are three plotters rather than two, they are lifelong best friends rather than strangers, and all are in on the plan.

The trouble with this is that none of our would-be killers show any aptitude for intricate plots, homicidal or otherwise. Nick (Jason Bateman) is the most normal of the lot, but when his hateful boss Harken (Kevin Spacey) steals an expected promotion from him, he is filled with understandable rage.

Mousy Dale (Charlie Day) is a dental assistant who is subjected to continual sexual harassment, now ramping up to blackmail, by the dentist he works for, Julia Harris, D.D.S. (Jennifer Aniston). Impulsive Kurt (Jason Sudeikis) actually likes his job with a chemical company, until his boss’ useless son Bobby (Colin Farrell) takes over, making Kurt’s life hell and threatening to literally poison thousands of people with his cost-cutting measures. Gradually, our gang comes to the conclusion that murder is the only way out, but each of them will kill another’s boss to avoid suspicion. This works as a theory. In practice, however …

HORRIBLE BOSSES mostly works because it is often funny and because Bateman is such a great straight man. The actor makes us like and identify with Nick, especially when he’s recoiling in incredulity at the excesses and ineptitudes of his two accomplices. Sudeikis treads a fine line very well as Kurt, who is largely a nice enough fellow who just doesn’t know when to stop. One of the movie’s more successful running jokes is that every time Kurt makes a dopey assumption based on ethnicity or appearance, it immediately turns around to bite him.

Day deals with Dale’s nebbish-hood well, but – with no disrespect to the actor, who may be magnetic in real life and/or other roles – it is not credible even within the rubber boundaries of this film that gorgeous dentist Julia would continually throw herself at this guy. Aniston has seldom looked better or sexier than she does here and she throws herself into the role’s lunacy with good comedic bravado, but her abuse of power never seems at the same level as that of the other two horrible bosses.

Farrell is almost unrecognizable and completely swell as the truly awful Bobby. Spacey can probably play sadistic perfectionists like Harken in his sleep, but since the character seems to be based on Spacey’s previous performances, it makes sense that the filmmakers went to the source of their inspiration. Jamie Foxx, Donald Sutherland, Julie Bowen and Ioan Gruffudd all show up in droll supporting roles.

The screenplay doesn’t deliver the precise Rube Goldberg construction that the set-up seems to promise, but it comes close enough to be pretty satisfying and most of the jokes land with laughs. On balance, HORRIBLE BOSSES is a decent employment of one’s moviegoing time.