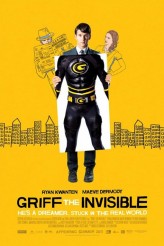 A very gentle Australian romantic comedy about a non-superpowered superhero

GRIFF THE INVISIBLE is liable to remind people of SUPER, KICK-ASS, SPECIAL, et al, in that it’s about a fellow in a superhero costume who wants to fight crime, but lacks superpowers. The movie is set in Australia and has two major twists. One, a la SPECIAL, is that Griff (Ryan Kwanten) believes he does have superpowers. The other really big twist is that, apart from the police worrying a little bit about Griff stalking around the neighborhood, he never tangles with anything more dangerous than his own emotions.

This being a love story, the emotions are plenty for Griff. He’s extremely shy – an odd personality quality for someone who’s got the job of “customer liaison” at a corporation – and has no friends. By night, Griff goes around the neighborhood and imagines saving people from muggers. Then Griff’s protective older brother Tim (Patrick Brammall) introduces Griff to Tim’s girlfriend Melody (Maeve Darmody). Although Tim is smitten with Melody, he ignores her idiosyncrasies, like her belief in parallel universes that can be seen by cats and in her unusual theories about how the spaces within molecules ought to be able to allow people to pass through solid matter. Melody senses a soul mate in Griff, who is reluctant to share his “secret identity” and doesn’t want to hurt his brother’s feelings. Melody figures out how to appeal to Griff’s imagination, but a misunderstanding could derail everything.

Director/writer Leon Ford avoids reinventing the wheel to a large extent by keeping the emphasis on Griff and Melody’s emotional lives rather than on derring-do. However, in the filmmaker’s attempts to celebrate Griff’s fantasy life, Ford seems to forget the form in which we’re watching the story. This is a movie, and in movies, sometimes ordinary people don strange costumes and try to fight crime, even when woefully ill-equipped to do so. We therefore spend a lot more time than any of the characters do on attempting to figure out what Griff sees, what everyone else sees and what parts are shared. This quickly becomes less trippy and fun than it is perplexing and distracting.

Kwanten has a lot of soul and Darmody has the gift of being utterly grounded even when Melody is discussing some very unconventional notions of how things work. We do root for their characters as a couple. Kwanten is also very emotionally open and realistic, but there doesn’t seem to be anything the actor can do about the script’s failure to give Griff the kind of altruism necessary for us to accept him as at least a wannabe superhero. We see why he is opposed to bullies, but vengeance isn’t justice. When Griff engages in a bit of sabotage that has the effect of embarrassing not only an office tormentor (Toby Schmitz), but their benign boss (the excellent David Webb), he seems less like a budding savior and more like a thoughtless perp himself.

The romantic elements work better than the magical realism bits until the finale, when all of the film’s genres come together in a satisfying way. GRIFF THE INVISIBLE is sweet and pleasant, but it is often a little too relaxed for its own good.