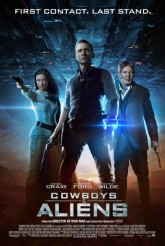 After seeing if scary, human-hating extraterrestrials fit best in deep space, Antarctica or small-town America, COWBOYS & ALIENS flings them into the Old West. It’s a surprisingly good fit, with the alien villains doing the things aliens do best – blow stuff up and bring together humans who would otherwise probably be killing each other.

The year is 1873. Daniel Craig stars as a man who wakes up in the Arizona desert unable to recall his own name – we’ll learn he’s called Jake Lonergan well before he does. What we and the character all find out very quickly is, memory or no, he can take down a bunch of well-armed badasses in less time than it takes to read this sentence. Since he’s played by Craig, this is perhaps less surprising to the audience than it is to Jake. All Jake remembers is that he speaks English, that he evidently can defend himself effectively and that he has a strange metal clamp on his left forearm that he cannot remove.

Jake makes it into a small town virtually owned by cranky cattle baron Woodrow Dolarhyde (Harrison Ford), where a lot of trouble is caused by Percy (Paul Dano), Dolarhyde’s feckless, drunken bully of a son. Jake subdues Percy, they both get into trouble. Then spaceships zoom in over the horizon, simultaneously kidnapping people and opening fire and everybody realizes they’ve got bigger problems than they’ve ever imagined, even if they have absolutely no idea of what they’re fighting.

The screenplay by – deep breath – Roberto Orci & Alex Kurtzman & Damon Lindelof and Mark Fergus & Hawk Ostby, screen story by Mark Fergus & Hawk Ostby and Steve Oedekerk, based on Platinum Studios’ COWBOYS & ALIENS by Scott Mitchell Rosenberg is much more cohesive and inventive than the size of the writing roster would indicate. Yes, formulaic notes are hit now and then, but that’s to be expected of a movie that has such a declarative title. The writers and director Jon Favreau take care to deliver everything that seems implicit in the concept, including Western drama, Western action, sci-fi action, character arcs and a healthy sense of humor that thankfully never targets the fourth wall.

There’s also a plot twist that in retrospect seems evident, but there’s so much going on that it has the intended “Ah!” effect when it hits. The aliens borrow a bit from the iconic H.R. Giger design but have their own creepy look, with at least one new wrinkle that increases the visceral fear factor. Their lack of speech makes them even more fear-inducing.

As for the cowboy side of things, the filmmakers bring in just about every imaginable Western trapping aside from new settlers. There are horse sequences, shootouts and ambushes galore, along with the lonely stranger who rides into town and becomes a hero against his will and the damaged man rediscovering his humanity.

In terms of rediscovery, it should be added that Ford is allowed here to bring forth all those qualities that made him such an icon of the ‘80s. Recent roles have somehow not quite tapped his essence in this way, so even though he’s been working steadily, there’s a sense that he’s returning in some vital way.

Craig is superb and the supporting cast is enlivened with the likes of Keith Carradine, Adam Beach, Clancy Brown and JUSTIFIED’s Walton Goggins, who makes an especially strong impression.

COWBOYS & ALIENS is everything its moniker implies, including a whole lot of fun.