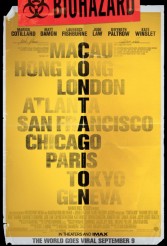 An impressively smart, crisp medical thriller that in continually watchable, even though – or perhaps because – it largely plays like a dramatized CNN report

If there is a worldwide pandemic of a fatal disease, odds are good that it will play out fairly like what we see in CONTAGION. Director Steven Soderbergh and screenwriter Scott Z. Burns have made a film that plays like a curious hybrid of a CNN special report and a zombie movie – minus the walking dead, of course, but with that same sense of uh-oh, if the disease doesn’t get you, the human panic will.

CONTAGION is erudite by the standards of a big Hollywood movie – we don’t feel that we’re being talked down to and we walk out of the theatre feeling a little bit smarter (or at least more informed) than we did when we arrived. The film tracks a number of characters affected by the outbreak of a pandemic that comes to be known as MEV-1, which can be transmitted simply by coming in contact with an object or surface previously touched by an infected person, to say nothing of coughs and sneezes. The disease attacks the lungs and brain, causing acute respiratory distress in the former and fatal swelling in the latter.

The film starts with the caption “Day 2,” introducing us to Minneapolis-based business executive Beth Emhoff (Gwyneth Paltrow), on her way home from Hong Kong and already not feeling well. By the time she’s back with her husband Mitch (Matt Damon) and her little boy from a previous marriage, Beth is coughing and looks like hell, though still insisting she’s all right. Then she collapses on the floor in convulsions, she’s rushed to the ER – and then she dies. Mitch is not only devastated but furious, since nobody is able to tell him exactly what caused Beth’s death. Then Beth’s young son dies, other people fall ill – not only in Minneapolis but in Chicago (where Beth had a layover), Hong Kong and Tokyo – and the Centers for Disease Control and the World Heath Organization suspect they have a potential epidemic on their hands of a disease that they can’t yet prevent or even treat, because they cannot yet identify what it is.

Captions continue to tell us which day it is as CONTAGION cuts back and forth between various characters. Mitch and his teenaged daughter Jory (Anna Jacoby-Heron) are the primary civilian protagonists. Otherwise, we’re following CDC doctors and investigators (Laurence Fishburne, Kate Winslet, Jennifer Ehle), a dogged San Francisco researcher (Elliott Gould) and a WHO representative (Marion Cotillard) whose investigation in Hong Kong takes a bizarre turn, plus an unscrupulous Bay Area blogger (Jude Law).

CONTAGION tries to envision and depict most of the aspects of a worldwide pandemic – rationing, rioting, roadblocks, lawlessness, paranoia and other kinds of societal collapse. Readers of Max Brooks’ wonderful WORLD WAR Z will recognize the around-the-world-in-clips approach. It really is intriguing to see how much this serious-minded film resembles movies about plagues of the walking dead. Either there are only so many ways to depict global epidemics, or else most of the movies we know about such things (apart from THE ANDROMEDA STRAIN and OUTBREAK) concern zombies, and they already hit on the best way to show this kind of issue.

CONTAGION does avoid taking the absolute worst view of the situation – we are shown, but not frequent murders committed by civilians nor homicidal roundups by authorities. We are shown how epidemiologists meticulously follow up on every hint of a disease’s origins in hopes of finding parallels that made lead them to a cure and/or vaccine. Despite a few chunks of doubtlessly accurate but impenetrable scientific speech that will come off like babble to much of the audience (kudos especially to Ehle for heroically wading through it), much of writer Burns’ dialogue is witty and even deliberately funny in places.

However, we don’t get too far into any one character’s story. Ethical dilemmas are sketched in efficiently, but in an effort to avoid hitting any emotions too hard, the filmmakers err a little too much on the side of caution. We’re fascinated by what’s happening and curious about how the various problems can be solved (if they can be solved at all), but even the deaths of several main characters don’t hit us as the gut punches that seem intended.

CONTAGION is a first-rate advertisement for promptly washing one’s hands and avoiding anyone conspicuously coughing or sneezing in public, though exactly how much wariness this will trigger in the individual viewer probably depends on pre-existing phobias. For awhile, it’s fun to follow the camera as it faithfully catalogues every surface the infectious Beth puts a finger on, but when we don’t see who else then comes along and picks up the germs from there, it seems like we spend a bit too long with this. When we do find out how the disease came into existence, its randomness is horrifying and entirely credible, but it also feels a bit after the fact – we don’t get the “aha!” feeling that might have come if we’d seen it at the time the scenario is surmised aloud by one of the characters. (It also, perhaps inadvertently, suggests how a lot of the spread of diseases with these types of origins could be avoided altogether, but that’s a rant for another day.)

CONTAGION is a strong movie. It appeals to the head more than to the heart, but when that’s done properly, as it is here, this can be a good thing.