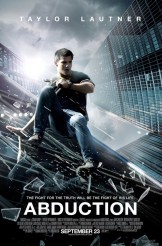 ABDUCTION feels so much like an adaptation of a young adult novel that it’s surprising to see that the script is an original (okay, according to the production notes, it’s based on an un-screen-credited idea by executive producer Jeremy Bell) by Shawn Christensen. Indeed, Christensen turns the original premise, and the title, into something of a red herring. There’s a sense of familiarity about the film, but it’s a perfectly enjoyable enterprise on its own terms.

Taylor Lautner stars as Nathan, a teenager in upscale suburbia living a reasonably happy life. His biggest problems would seem to be his unspoken crush on across-the-street neighbor/classmate Karen (Lily Collins) and his dad Kevin’s (Jason Isaacs) apparently pathological obsession with teaching Nathan to fight. Nathan is no physical slouch – he’s one of the top members on the school wrestling team – but he is a bit annoyed at Dad’s weird need to engage in much harsher combat than seems healthy. Then a school project leads Nathan and Karen to a website for missing persons, including software that shows what abducted children would look like now. Nathan sees a digital image that looks remarkably like him. Pretty soon, all hell breaks loose, with flying bullets, Russian assassins, CIA agents and Nathan and Karen running for their lives.

Christensen deserves a healthy dose of credit for taking what seems like a whopping coincidence into something that makes sense within the film’s universe – if it seems awfully convenient that somebody put Nathan’s image on that website, just wait, there’s an explanation. Other aspects of the story don’t deserve quite so much examination, but it all rushes forward with good momentum.

Director John Singleton stages the action with great flair and enthusiasm, keeping in mind that this sort of thing is supposed to be fun as well as suspenseful. He and Christensen allow the film to build – we have time to take in Nathan and his world while absorbing the context of why he’s so adept once the situation explodes, literally and figuratively.

Lautner, best known until now as Jacob the werewolf in the TWILIGHT movies, has a disconcerting but not unwelcome stoic quality that is unusual in actors playing teen heroes. The characters tend to be more sensitive than the fierce, capable Nathan, who is clearly devastated by events but seems less in need of a hug than the opportunity to kick the living stuffing out of people who have it coming.

Casting of the adults is excellent, with Isaacs playing an intriguing ambiguity as the uncommonly aggressive Kevin, Maria Bello warm yet physically formidable as Nathan’s mom, Sigourney Weaver as Nathan’s therapist and Alfred Molina as an exasperated CIA agent.

Although the characters engage in a few platitudes – one of the ways we can tell this is young adult fare – ABDUCTION isn’t trying to make a statement or take itself too grimly. It is an entertaining thriller that lets Lautner show he looks good as a young action hero, and as such, it accomplishes its mission.