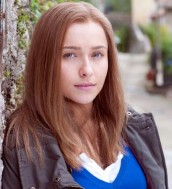 Interview: Hayden Panettiere is imprisoned by AMANDA KNOX: MURDER ON TRIAL IN ITALY

The actress talks her new docudrama, plus SCREAM 4 and HEROES 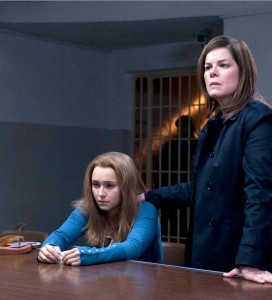 AMANDA KNOX: MURDER ON TRIAL IN ITALY, airing tonight on Lifetime at 9 PM EST, is a dramatization of the real-life case that’s been in the news for several years now.

American Amanda Knox was convicted of killing her college roommate Meredith Kercher while both were on vacation in Italy. The conviction is currently being appealed and the case continues to generate international controversy.

Hayden Panettiere – long known as the indestructible Claire Bennet on HEROES – plays Knox in the telefilm, with Marcia Gay Harden and Clive Walton as her parents. Panettiere talks to us about the film, as well as her feelings on the end of NBC’s HEROES.

ASSIGNMENT X: Do you feel like there’s any kind of universal theme in AMANDA KNOX: MURDER ON TRIAL IN ITALY?

HAYDEN PANETTIERE: I think themes, or morals – the moral of the story is very, very difficult in this case. I don’t think there’s that kind of theme at all. If anything, it’s more, “Appreciate your freedom and appreciate all the gifts you have in life.” It’s really difficult to say.

AX: Did working on a project this intense, where a lot of the questions it poses are unresolved, have any effect on you?

PANETTIERE: This was the first film that I actually had trouble sleeping on. It was more my mind constantly moving and going and thinking about the scene or what I had to do the next day, and this is the first time that I’ve ever felt that, but my mind was definitely going a lot. It was hard to quiet it. 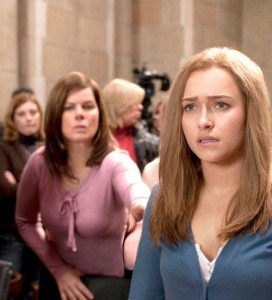 AX: Despite the stress of the role and the fact that you seem to be constantly working, you look really healthy and vibrant …

PANETTIERE: I try constantly to be more healthy, to take care of my body and love my body. And I think that’s a difficult thing when you’re young and you grow up in an industry [where] there’s a lot of badgering on that topic. As you get older, you try to love yourself more and be appreciative of your health. And in things that are so simplistic and not only things that are skin-deep.

AX: After playing the unkillable Claire on HEROES, were you looking to play someone who is sort of the opposite, that is, someone who is not only not super-powered, but also verifiably real?

PANETTIERE: Obviously, there are many things that go through your head while choosing a film. I loved being on HEROES, I grew up on HEROES, but it was very exciting to play a different character. And it was that in combination with how interesting and fascinating and worldly the story is. It’s one of those riveting stories where you just don’t know [what really happened].

We [the film’s creative team, including director Robert Dornhelm and screenwriter/producer Wendy Battles] spent five weeks, every day, talking about it and reading about it and looking at new evidence, trying to form some opinion. She’s innocent, she’s guilty, she’s innocent, she’s guilty, she’s innocent. I can’t say that I have an opinion. That’s why the story is so interesting – the facts and what people said and the changes in stories – I don’t think we’ll ever know [the whole truth]. You don’t get many opportunities like this in a lifetime, in a career. This girl was such an interesting character and the story just kept you on the edge of your seat. How do you turn that down? Not to mention the amazing cast they put together. I couldn’t be in better company. I was standing on the set of SCREAM 4 when they told me about this. I was standing in the driveway and I was jumping up and down, I was screaming at the top of my lungs, I was so excited that this opportunity had come up.

AX: What was your experience like working on SCREAM 4?

PANETTIERE: I was very hesitant about doing a horror film, but I think the right one came alone and I think SCREAM 4 was the right one. There are a lot of different storylines going on. It’s a little difficult for me to talk about it, because I haven’t seen it edited together yet, so you never know how a film winds up coming together or your independent [work] on a film until you really see what they’ve done. 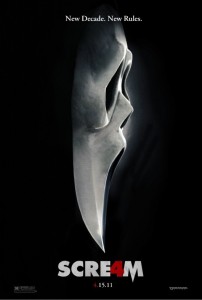 AX: You started HEROES at a relatively young age and the series lasted four years, so that’s a major percentage of your life at this point. What are your feelings about the series coming to an end?

PANETTIERE: I am very happy to be able to spread my wings a little bit more and to play a different character in a different world that I haven’t played before and do something and have an experience that I’ve never had before. I do miss the family. I grew up on it. It was four years and you know that you’ll never play that character again – you spent four years with her, you grew up with her, which is also something that’s sad, but you appreciate all the moments you had and the memories you have.

AX: Were you happy with the way HEROES ended?

PANETTIERE: Look, I love the show, it was my family, it was a wonderful experience and I’m not in any position to really say. I love it, I love everything about it, I saw the good in every storyline and everything that was given to us. And it’s not like I’m going to write something better [laughs]!