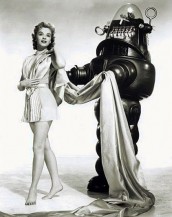 In Memorium: FORBIDDEN PLANET star Anne Francis passes away at 80

Actress Anne Francis passed away at the age of 80 over this weekend after a battle with lung cancer.

In PLANET, Francis played Altaira, one of two surviving humans on a mysterious planet and has admitted in interviews no one ever expected that science-fiction film to have the longevity it did.

In the intervening years, Francis became a staple of television, starring in many crime dramas throughout the ‘60s, 70s and ‘80s.

The actress was also immortalized by THE ROCKY HORROR PICTURE SHOW with the song “Science Fiction Double Feature” which contains the line “See Androids Fighting/Brad and Janet/Anne Francis stars in FORBIDDEN PLANET.”

Francis is survived by two daughters and a grandson.