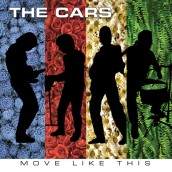 It’s been 27 years since The Cars released their last studio album DOOR TO DOOR (we won’t count The New Cars side project from 2005 that didn’t feature lead singer Ric Ocasek), but now The Cars have regrouped (minus Benjamin Orr who died of Cancer in 2000) for a new album titled MOVE LIKE THIS.

You can check out the new video below (as well as the song “Blue Tip” off the album) and party like it’s 1984 all over again.

MOVE LIKE THIS hits stores (and online e-tailers) on May 10.