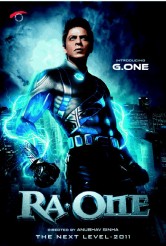 Marvel and DC comics should be looking over their shoulders as the new Hindi superhero movie RA.ONE recently took India by storm breaking boxoffice records.

Gladwin Gill recently hosted a private screening in Beverly Hills, CA of RA.ONE and also announced that over the next two years he is developing more film and television projects that will be released in both Hollywood and Bollywood.

According to the press release, RA.ONE is the story about “a father trying hard to ‘fit-in’ in his son’s badass world a son trying hard to ‘dude-up’ his dad from ‘aiiiyyyo’ to‘yo!’ and a mother lost in translation between her husband’s ‘ingeva’ and her son’s ‘in’ it!’ while Shekhar was trying every trick in the book to woo his son, get ‘dude-ified’ and ‘up his coolness quotient’ his son had given up on him.. Just when the father-son duo hit a deadlock; Shekhar strikes gold when he designs one hell of a game. Finally it all starts falling in place…as the family comes Together……only to find themselves in the middle of a crash….. Not just a hard drive crash but also a crash that would drive them to a disaster and make their lives goes – kaboom!!! … All hell breaks loose when the game that was meant to be played with… starts playing them…”

Check out the kick-ass RA.ONE trailer below.

Entrepreneur Gladwin Gill has built an empire in the medical field and is turning his passion for film to a core business under his holding company. Gladwin Gill currently is developing a film based on his life story among other projects in development.