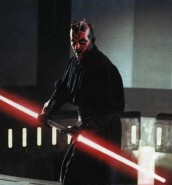 Starkey worked with Lucas in the 1980s as an assistant editor on THE EMPIRE STRIKES BACK and RETURN OF THE JEDI, and with STAR WARS: EPISODE I – THE PHANTOM MENACE hitting theaters in 3D February 10, 2011, he can’t wait to see what LucasFilm Ltd. comes up with.

“I’m excited to see what ILM and Lucas do with a real painful, artistic conversion,” says Starkey. “To date, I have not been a fan of conversion. I think they’re a fake form of 3D. AVATAR, CHRISTMAS CAROL, MARS NEEDS MOMS, these are the great 3D films to date. I haven’t seen great conversions, but I’m anxious to see what Lucas and ILM do. He’s a painstaking technician. He has an artistic genius and so do those guys.”

And if they succeed, Starkey says it could be nothing but good things for post-converted 3D films in the future.

“If it can be done great, it will be done on that movie,” says Starkey. “I think that’s probably going to become the benchmark conversion in 3D that’s been done to date.”