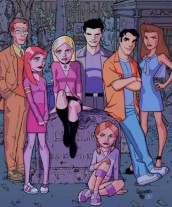 ASSIGNMENT X talked to DeKnight recently about his involvement with SEASON EIGHT, and whether he would be back for SEASON NINE.

“They just had a big summit with all of the writers and Dark Horse that I couldn’t attend, I was actually doing commentary for the SPARTACUS: GODS OF THE ARENA DVD,” DeKnight explains. “I’m just so consistently swamped on this show that I can’t do anything.”

He went on to say that while he won’t be return to the land of Buffy at the moment, he was a big fan of SEASON EIGHT and everything creator Joss Whedon and the writers got to do with the series.

“I’m one of the biggest Joss Whedon fans ever,” he says. “I thoroughly enjoyed SEASON EIGHT. One thing about it that I just loved is he kind of got to do what we wanted to do with the BUFFY animated show that we could never get off the ground. In a comic book we could do all the stuff we couldn’t do on the show – you can make Dawn a giant or make her a centaur. It was so fantastic to see that unleashed.”

The experience of writing even the one comic of BUFFY – Season 8 was a good experience for DeKnight who loved being back in that playground and he hopes that his comic will spawn a new BUFFY merchandise item.

“I absolutely had a blast doing it,” he exclaims. “I keep hoping that Dark Horse will release a Vampy Cat plush toy, that’s all I want. I want a Vampy Cat toy!”

CLICK HERE for more of our Steven S. DeKnight Interview