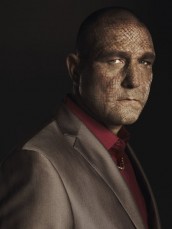 The actor talks Scales, plus he chats about his guest stint on CHUCK 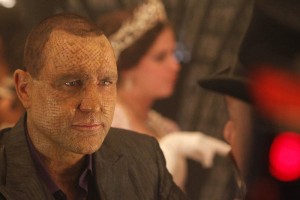 In NBC’s THE CAPE, which has its finale tonight at 9 PM, the masked but non-superpowered hero must contend with several villains including Scales.

What dock boss Dominic Raoul, aka Scales, may lack in social manipulation skills, he makes up for in sheer toughness (and has somewhat reptilian skin to go with the nickname). When the character is meant to be immediately intimidating, it helps to cast an actor like Vinnie Jones, the English former footballer turned actor who has played a lot of gritty types in films like his debut, LOCK, STOCK AND TWO SMOKING BARRELS, SNATCH, X-MEN: THE LAST STAND and guest-starring on an episode of CHUCK.

In person at Universal, Jones doesn’t seem like his frequent fictional persona, turning out to be soft-spoken and amiable, albeit he really is just as tall as he looks on screen. [Editor’s Note: This interview was conducted before the news of the series being canceled].

ASSIGNMENT X: Were you looking to do a television series?

VINNIE JONES: On this, I probably was. I came over [to the U.S. from England] – [doing a TV series] just gives you a sense of, you know what you’re doing for a few months. As an actor, it’s sometimes pretty scary. You do a movie and that’s great, you leave that and you find a new family and you leave that and then off you go back home and you wait for the next one. Whereas on TV – I did a week on CHUCK, which was good fun, and then went in for this. I’m certainly totally having a blast with it. 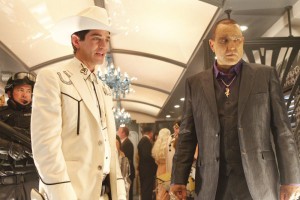 AX: What’s up with Scales? He hates the Cape, but he seems to resent Fleming/Chess just as much.

JONES: Yeah. Exactly. We’ve found out a lot more about Scales, where he’s from, as a baby you see him, and you see him as a young lad and then you see him a bit older. You see him escape. He’s in a freak show and he’s got this really bad master, who’s whipping him, and you see his back is whipped to pieces. I finally take the whip off the whip-master and break free. So you see why he becomes so strong and wants to be so powerful. When I look at this role, it’s a bit like Tony Montana in SCARFACE. He wants to be the boss. He wants to take over. I don’t answer to Chess – I don’t want Chess to be my partner. Scales wants to be the main baddie. So that’s where we’re going with it. [In the episode] “Scales” me and Chess stand off, and he says, “You want a war?” And I say, “Yeah, let’s go to war,” and I pull the coupling off the train and the two of us go at it like that.

AX: How long does it take to do the makeup for Scales?

JONES: If I do the hands as well, it’s three hours, and then an hour to take it off. It’s not one mask, it’s nine pieces.

AX: Was doing CHUCK a sort of good experiment in seeing if you liked doing American series TV or not?

JONES: Yeah, it really was. They make you feel at home – I was a guest star enrolled for a week, and it just gave you an insight what to expect really. And I love it, because TV’s fast and furious. Get in, boom, bang, do it, not ten, twenty takes. I love doing TV. I came to work prepared and do the scene, you get two or three good takes, done. You’re moving on, it’s great. [On THE CAPE], it’s been exciting to see what they’re going to write for us for the next episode. It’s really exciting, it’s really good fun.