The writer talks about creating a superhero without superpowers

NBC’s THE CAPE airs its final episode tonight, Feb. 28 at 9 PM as it follows framed Palm City police officer Vince Farraday, played by David Lyons. In order to clear his name and get back to his wife and young son, Faraday must clean up his hometown by assuming the identity of comic book superhero the Cape.

Alas, the series didn’t bring in the kinds of ratings that would allow it to remain in its competitive Monday night slot. However, THE CAPE’s creator Tom Wheeler is happy to share the series’ origin story with us. [Editor’s Note: This interview was conducted before news of the cancellation broke.]

ASSIGNMENT X: How did you come up with THE CAPE?

TOM WHEELER: THE CAPE is my kind of love letter to comic books. I was a comic book fan all my life and had always wanted to write one and my effort to write a comic turned into this sort of big adventure.

AX: Is “Are you a DC fan or a Marvel fan” an appropriate question for you, or did you get into comic books later than that core issue?

WHEELER: I was a Marvel kid. I was Marvel zombie growing up. I grew up with DAREDEVIL, I grew up loving X-MEN – really, it was a great time to be reading comics, because Frank Miller was starting to write and Alan Moore was doing his best stuff. And then I loved DC, too. GREEN ARROW was one of my favorites. I liked the characters that had to teach themselves how to overcome things. I loved those kinds of street-level characters. I still collect – every Wednesday, I go get my books at my comics store, because it’s been a big part of my life, and this is really an effort to do costumed crime drama on TV in a way that I don’t think it’s been done before.

AX: Would you say that, in very broad strokes, THE CAPE has BATMAN roots, in that this is a superhero with no superpowers?

WHEELER: Yeah. Sure. I also am certainly impacted and a fan of some of the outstanding character-driven, superhero work that’s been done in these past several years, KICK-ASS or WATCHMEN or the Chris Nolan DARK KNIGHT stuff, what I really hoped to do was create a city in a world where the Cape can exist in his own right, that isn’t Gotham City, that also isn’t our world alone, it’s something that feels kind of pulp era, in the vein of like THE SPIRIT or THE SHADOW, yet also has a sort of twenty-first-century sensibility to it. I think this is an interesting moment for people who maybe aren’t genre fans or comic book fans [with] a character like this. There’s a sort of wish fulfillment aspect to it and a sense of powerlessness against [the social structure], whether it’s corporations or the bad economy or just wanting to sort of make a difference, so that’s one of the things about it that I love.

AX: Something that’s going on real-world is the attempt to privatize things like police departments, the way the villain Peter Fleming does in THE CAPE …

WHEELER: It kind of is ripped from the headlines. I read [very recently] that there were charter programs for private policing and the things that you feel you’re writing that are science-fiction – of course, it’s an aspect of our world, but I do think it presents a really interesting dilemma for a hero, when the whole city structure is in a sense turned against him and I think it brings up a lot of fears of the compromise we make for security and things like that. Issues of the last ten years are dealt with a lot and I think it is about individual empowerment and then, in the comic book world, a guy using the oldest tricks in the book, trying to take on the highest-tech bad guy. I love those aspects.

AX: There seem to be elements of Halliburton and Blackwater in all of this …

WHEELER: There are some interesting groups out there. What do they do? I don’t even know what they do. They do everything. They are nations unto themselves in some ways and they have different rules in some cases, and so I think that contributes to people feeling a little helpless. THE CAPE tries to capture some of that feeling of, you can fight back.

AX: How far along were you in developing THE CAPE before you brought in other people? What aspects of it were the original tent-poles for you?

WHEELER: I’ve always wanted to do a story about a father taking on [the identity of] his son’s favorite superhero – I just thought emotionally that was a story I wanted to tell. I didn’t know what the hero was, though, and it sort of took awhile, because he couldn’t have powers and when I landed on the cape and I knew I was going to work with [executive producers] Gail Berman and Lloyd Braun, I was going to write a pilot with them – I had worked with Lloyd on a thing for ABC called EMPIRE – and once I had the cape, it felt very simple but very iconic. It felt very primal in the sense that as kids, we put the blanket around our necks and we pretend we’re superheroes. It captured a lot of the mythology and the energy that I wanted it to have, and so then we were off to the races. I wrote the pilot script, NBC liked it, we cast it, we were lucky enough to get this outstanding cast, James Frain and David Lyons and Keith David and Summer Glau and Vinnie Jones. 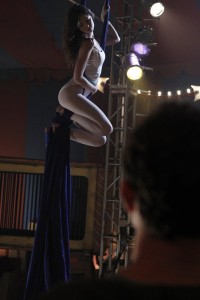 AX: Was Orwell always written as female, or was that the result of Summer Glau becoming involved?

WHEELER: We were looking for Orwell, we knew that she was female, and suddenly, Summer just walked in and we were looking at each other and going, “That’s Summer Glau!” And she was great and she was everything we hoped she’d be and she’s this sort of superhero unto herself, also one of the sweetest people on Earth, and she’s just great.

AX: Since she’s played by Summer Glau, has Orwell turned out to be a bit more butt-kicking than originally conceived?

WHEELER: Absolutely. She’s almost an ALIAS-like character. She plays many disguises. She’s this twenty-first-century Lois Lane.The Cape and Orwell will not be [romantically involved] – he’s loyal, he’s got to get back to his family. Having said that, there’s a wonderful chemistry between David and Summer. There’s also a wonderful chemistry between David and Jennifer Ferrin, who plays Dana [Vince’s wife].

AX: As far as the Carnival of Crime, did you want to do something about a carnival and integrated into THE CAPE, or did you go, “How is he going to learn to be a superhero?” and then thought, “Carnival!”

WHEELER: Well, I love Houdini, I love escapism, I just love the timeless feel to it. I wanted Palm City to have a timeless feel to it, something that felt like little bits and pieces of different time periods, sort of silver-age comics and the Twenties, and who doesn’t love carnies? And it was definitely about the oldest tricks in the book kind of thing and that felt like a way in that I hadn’t entirely seen in creating this sort of circus act.

AX: How did you come up with “The Cape” as a superhero? Did you just think, what’s the most iconic superhero accessory and come up with a cape?

WHEELER: It’s a “click” moment where you feel like, “No, that’s too simple,” and then you’re like, “Well, wait a minute, it sort of feels in a pulp way really complete and very mythological in the superhero sense and very defining for this superhero.” And then the actual fact that his power is actually the cape felt like I earned it. It felt like it wasn’t just a name, it was his weapon. It was his persona. The cape is a character. We actually deal with the history of the cape. This particular cape has a dark history in the story and with that, it felt very natural, it felt very tight.

AX: Do you ever worry about Edna Mode from THE INCREDIBLES figuratively popping up and saying, “No cape”?

WHEELER: Yes. Capes are cool again. That’s been my mantra, because THE INCREDIBLES was brilliant [and argued against the use of capes for superheroes]. And yeah, capes need a little bit more respect now.