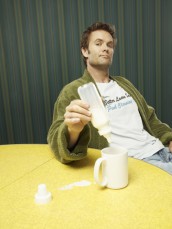 He also discuses his appearances in WINTER'S BONE and THE ROAD 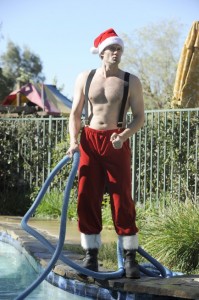 Actor Garret Dillahunt grew up in Washington State. He’s often associated with portraying ominous folks, though he has had his saintly moments on screen – he was even Jesus Christ in THE BOOK OF DANIEL – and has roots on stage and in comedy. With Fox’s freshman Tuesday night half-hour success RAISING HOPE (returning for new episodes tonight), Dillahunt returns to humor. His character Burt Chance is a married man who is nonplused to become a grandfather, especially when living-at-home son Jimmy (Lucas Neff) decides to keep baby Hope after Hope’s serial killer mom is executed. In part one of our exclusive interview, Dillahunt talks about the new gig, as well as his work in the feature films WINTER’S BONE and THE ROAD.

ASSIGNMENT X: You’ve played a lot of rather tough, scary people lately. Do you have a different process for playing someone like Burt Chance on RAISING HOPE?

GARRET DILLAHUNT: I don’t know if my process is any different. I’m the same actor. I like to try to do the opposite of what I did last time. A lot of the folks in this show come from the theatre, Martha [Plimpton] ( does and Lucas was a theatre guy in Chicago, that’s where they found him. In that kind of world, you’re really used to playing different characters almost every job. You’re the prince in one and the pauper in the next. I think it really helps the creativity on the show, certainly in my choices, to try to do something different than I did last time. I think what [creator/show runner] Greg Garcia enjoyed and we did too was, it’s a real ensemble, and there’s a real environment we’ve created on set where we all felt that we could be creative and a little loose with our characters, so in a lot of the frames, it’s real deep. You’ll see stuff going on all the way to the back, which I really like. I like physical comedy, I like kind of low humor, I have a weakness for it. I like the physical nature of the comedy in this.

AX: Do you underplay at all in scenes with Cloris Leachman, as her performance is kind of large?

DILLAHUNT: You’re not going to want to get into that contest. I’m glad she likes me and I like her, too. Every day, she just comes and cracks up – she just points to my face and cracks up, and I don’t know what’s funny, but she thinks it’s funny. There is a lot of room for subtlety in the acting, oddly, so yes, that’s my instinct anyway, to always sort of play under, sometimes to my detriment, but I think that’s why it’s funnier to me. 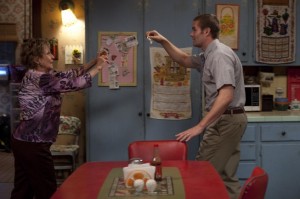 AX: How is it playing opposite Martha Plimpton as a married couple?

DILLAHUNT: I love Martha. I’ve known her quite awhile and it’s odd that we’ve never worked together before. Her father is Keith Carradine, who I killed on DEADWOOD. She would come and sometimes hang out on set. And there’s another connection with this play called EYE OF GOD that was turned into a movie later, where she was in the movie and I was in the play. It was years of missing each other on jobs, and so it’s nice to work with her finally now and I think she’s hilarious, which surprised me, because I kind of knew her as a dramatic actress, so I stereotyped her, but she’s really funny and really down to earth and really easy to work with. I think she’s warm. The relationship you see in the pilot, which I think is a good one, is because of her.

AX: Lucas Neff, who plays your son, is kind of a screen newcomer …

DILLAHUNT: He’s an absolute newcomer. This is his first [onscreen] job.  I remember when I had my first job. I think they just got really lucky with the casting here. They worked hard enough to make sure they got the good cast, because he’s kind of perfect for it. There’s something about his face, you just kind of want to play a joke on him or something. He’s a good sport and he’s a little goofy and he’s done a ton of theatre in Chicago and I think that’s where they found him. I’ve never played a grandfather before, this is a first, and that was a bit of a bitter pill, but it makes sense, and it is absolutely possible I could be his father. 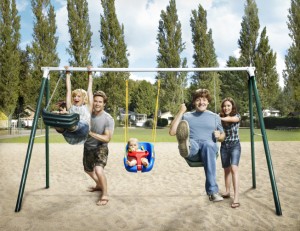 AX: Are you and Martha Plimpton actually old enough to be Lucas Neff’s parents?

DILLAHUNT: I don’t know about Martha, but I am. If I had gotten married when my parents did, and had a kid right away, absolutely. I’m just a generation removed from when this would [have been] a common age to be a grandfather, but I’m absolutely inexperienced in that.

AX: RAISING HOPE is on the outrageous side. Have there been scenes where you’ve thought, “Oh, my God, are we really going to do that?”

DILLAHUNT: There have been a couple things. For a guy who spends most of his career on cable and in the movies, it’s not really shocking – it’s just shocking that it’s going to be on TV. “Are we going to say that?” I think Cloris said, “Who moved my vagina?” in the Christmas episode. I didn’t think that would make it out of the read-through, but it did.

AX: You were in WINTER’S BONE, which turned out to be a huge, multi-Oscar-nominated success. Was that a nice surprise?

DILLAHUNT: It was a nice surprise. I feel a little uncomfortable in a way taking credit for WINTER’S BONE. I have a very small part. They asked if I’d like to do this part and I kind of breezed in in the middle of still doing TERMINATOR, and I don’t think I realized how special it was. It’s doing so well because of Jennifer Lawrence and the director Debra Granik and John Hawkes and Dale Dickey. I’m just lucky to be along for the ride on all their hard work.

AX: You were also in THE ROAD …

DILLAHUNT: My portion of THE ROAD was in Pittsburgh, in winter. There’s a stretch of road that hasn’t been used since ’64, and it’s nicely cracked, so that’s where the tunnel was and all those decrepit cars. And I’m just a huge Cormac McCarthy fan and I’m determined to be in every Cormac McCarthy movie ever made [laughs]. I missed ALL THE PRETTY HORSES, but this one came along and it’s a movie about the man and the boy. So anyone who’s not the man and the boy is going to get two or three days of shooting. I felt fine doing that, since [Robert] Duvall was doing it. I just wanted to be a part of it, so I auditioned.

AX: Did you have any trepidation about menacing a small boy?

DILLAHUNT: I was trying not to, but you could tell he wanted to eat that little boy. No, I didn’t have trepidation. It’s what the story is. I get uncomfortable about things like – like I think our show [RAISING HOPE] is fun, but [another reporter] alluded to, “Didn’t that seem a little dark [in the pilot] with the baby present at the execution?” And I just sort of feel like, we’re so worried about things like that that I think it’s detrimental to creativity. So I wasn’t worried about it at all. I don’t know what would happen in the future if there’s no food. I’m sure some people would become cannibals. I’m glad he didn’t get the kid [laughs].

DVD Review: UP FROM THE DEPTHS/DEMON OF PARADISE – Roger Corman’s Cult...
Breaking News: Could FRINGE be looking for a series end game?
AMERICA’S GOT TALENT Recap: “Semi-Finals - Round 2” - Results Show
TV Review: CHUCK - Season 5 - "Vs. The Goodbye" - Series Fin...