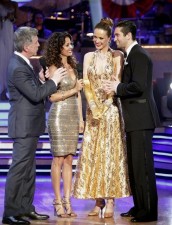 Meanwhile, Toby Keith performs on DWTS while Kendra Wilkinson and Ralph Macchio need to watch their back 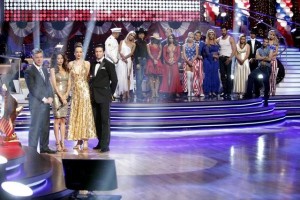 In the first shocker of season 12, super model Petra Nemcova gets eliminated from DANCING WITH THE STARS – Season 12. It’s well known that models never get too far on DWTS. In fact, they are usually first to go. However, it seemed Nemcova had somehow made a clean getaway from “the curse of the super model”. Wrong! The curse caught up with her when she was let go from the competition after tying for last place with Kendra Wilkinson and Ralph Macchio Monday night. Coming in last is the time when a solid fan base is your only hope. Unfortunately, not very many people are familiar with Nemcova and so she had to rely heavily on her judges’ scores alone, which were not good enough to overcome her lack of followers this week. And, yes, Wilkinson did it again. She made it through to week six which might mean she has a heck of a GIRLS NEXT DOOR following.

In an appropriate tribute to DWTS’ All-American week Toby Keith performed twice while Macy’s Stars of Dance also danced an impressive routine. In between hosts Tom Bergeron and Brooke Burke calling out who’s safe, there were a few video segments, one including season 12’s first to get the axe Mike Catherwood hosting a “celebs exposed” ditty about some embarrassing moments for the cast, particularly embarrassing for Hines Ward and Chelsie Hightower. The clip with Maksim Chmerkovskiy boosting about his sexiness was probably not such an embarrassment to the narcissistic and handsome pro. 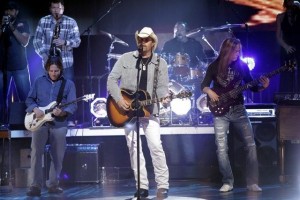 Another segment showed the judges virtually telling the celebs what their weaknesses are and what they need to do to improve their chances of winning. PAY ATTENTION Macchio and others! No one has received a 10 yet and few nines have been given out. It’s time to break away from the pack and show your specialness gals and guys! You can’t ALL win. Someone has to step up…now!

And so with All-American week concluded in week five, there is now seven left to compete: Kirstie Alley, Ward, Romeo, Wilkinson, Macchio, Chelsea Kane and Chris Jericho. So, onto week six…stay tuned!