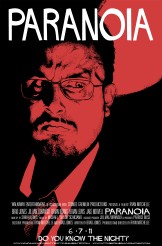 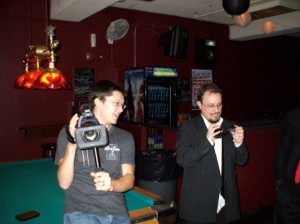 Creating a film on any kind of budget can be a daunting task, but when Springfield, Illinois filmmakers Ryan Mitchelle and Brad Jones decided to create a taut little Hitchcockian thriller with a very small crew, they found they had to utilize every trick in the book.

The end result is the impressive PARANOIA, a thriller that stars Jones as a Mark Bishop – a man whose life is falling apart. His wife has left him and there’s a serial killer running around town who may be targeting him next. When a mysterious man ends up dead on his doorstep, Bishop is slowly dragged into a maddening experience that leads him face to face with the demons from his past and perhaps a chance at his own redemption.

Jones is best known to internet fans as The Cinema Snob and he not only stars as the lead in the film, but he also wrote and produced. Mitchelle, who has helmed several short films and popular viral videos makes his feature film debut with PARANOIA.

The two recently spoke with ASSIGNMENT X in this exclusive interview about the travails of low-budget filmmaking and how they were able to pull off such an ambitious movie with limited resources.

You can purchase the film on DVD and find out more details by going to the official WALKAWAYENTERTAINMENT website.

ASSIGNMENT X: Can you talk about the inception of PARANOIA? Both of you are primarily known for comedy – why tackle a thriller for your first feature film?

RYAN MITCHELLE: In the past I’ve done short films and music videos that have all been comedies. I like to have lighter more fun subjects in short content since you don’t have the audience’s attention for a very long time. I feel that to effectively build drama and tension you need the length of a feature film to do it. I love thrillers and when I read the script for PARANOIA, I knew I had to be a part of bringing it to life.

BRAD JONES: I actually started out in thrillers. The first three movies I did as a writer and director were very dark films.  As a lark I created the Cinema Snob character which really took off on YouTube, then on my own website, and after finding my voice in comedy I did my fourth film GAME BOYS, but I’ve always had a huge soft spot in my heart for doing thrillers. In terms of full-length films, it’s what I prefer doing.

AX: How did the script change over the course of production?

JONES: I wrote the original draft of the script in the late ‘90s, and it changed heavily since then. PARANOIA was the first script I ever wrote. The original draft was very primitive, a lot of the elements in the completed film were there, but it went through numerous changes. In the following five years, I wrote two more drafts, one that completely changed the third act of the movie, yet didn’t provide any conclusion.  The next draft gave an explanation to the film’s plotline.  When I sent the script to Ryan, he and I collaborated on ideas for the final draft, which boiled down to making the lead character more likable, and also tightening some of the set pieces.

MITCHELLE: The first version I read had great potential, but needed a lot of polishing before it could be produced. As Brad mentioned there were several great plotlines and story elements that we took from the various drafts and weaved together to make the final story. Also, there were a few scenes that were in the script that when I was creating the budget for the film, I realized that certain elements just weren’t feasible and needed to be re-written. Brad and I collaborated for over two years refining the script into what we used for the film. 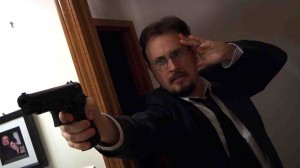 AX: What were some of the challenges of working on the indie budget?

MITCHELLE:  Filmmaking is problem solving. Money can solve a lot of problems. Since we didn’t have a studio backing us and needed to get by on a very modest budget, we had to come up with creative ways to get the most bang for our buck. It mostly meant that we changed scenes to accommodate for inexpensive action to achieve the same plot points. It isn’t as spectacular as I may have wanted it, but the story is great and that’s what really matters.

JONES: I had it pretty lax this time since, since this is the first movie I wrote but didn’t direct.  All the stress work went to Ryan, thank God!  Actually, it was a very smooth shoot.  Whatever annoyances there were came from just being on a set and the normal stresses that go with that territory.  A couple of things had to be cut from the script for budget reasons. Originally there was a huge car crash that we couldn’t secure, and also one scene had taken place in a convenience store.  When no stores around here would help us out, we switched it to a bar. Easy fixes.

AX: What kind of equipment did you shoot the production on and what were the pluses and minus of that equipment?

MITCHELLE: PARANOIA was shot on the Panasonic HVX200a. It’s a really versatile HD camera. It was able to get great shots in low light which being a very dark and moody film pretty much every shot was in low lighting. I had a very small light kit that was able to get into some pretty small places without needing any extra power, but they were also fragile and several of the lights broke half way through production. 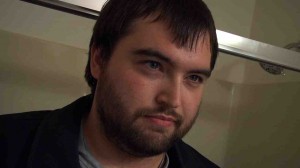 AX: What were the benefits of shooting in the small town of Springfield, IL? Were you able to get more bang for your buck?

MITCHELLE: Absolutely. The biggest reason was the cost. All of my previous projects were made in Los Angeles or Chicago. There it could be $600 just to apply for a location permit, let alone what the location owners might charge you for the use of a location. When I spoke to the mayor’s office in Springfield about obtaining filming permits the director of communications for the city just replied, “You don’t need my permission, good luck and have fun!” So that made a huge difference in budget. Finally since the cast and crew were all from Springfield we knew somebody at almost every location.

JONES: I’ve shot all of my movies in Springfield.  They are very gracious to independent filmmakers in this town.  In many bigger cities you couldn’t breathe on a set without acquiring some kind of “oxygen” permit.  Springfield is so much more relaxed in that regard.  What would cost a fortune in one city could be done with a micro budget here in town.  And more often than not, you can easily find a place of business the shoot inside of, so long as it’s locally owned.

AX: As the actor who also wrote the script, did you have to separate yourself from the two positions during filming, or did being the writer also help in being able to make changes on the fly?

JONES:  This is now the sixth script of mine I’ve acted in, and for me it always helps being both the writer and an actor, because I’ve lived with these characters since coming up with the basic story – I know exactly what I want out of them.  And in this case, given that it’s been a script that I’ve had on my hands for over 10 years, I’ve had plenty of time to figure out how to play my character Mark Bishop.

AX: Ryan, you handled many different aspects of the production – how did you handle juggling everything on your end? What was the best part of doing it all and what jobs would you like to avoid on your next film?

MITCHELLE: Wow where to start. Yeah I was the lead producer, director of photography, camera operator, editor, caterer and also the little job of the director. Really I love getting my hands dirty with all aspects of production so that’s just how I like. I would say the key to not going completely insane was staying very organized. My training as a producer made that possible. I know that next time around I will hire a good location sound recordist. That was the biggest issue I had in making this film. Some locations I had sound that was interfering with an actors’ dialogue. I ended up having to do ADR with the actors since the sound we recorded on set wasn’t useable. It took a lot of time and effort. I also plan to hire a good craft services company because hey, why not. 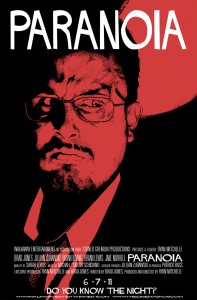 PARANOIA is now available on DVD at www.walkawayentertainment.com | ©2011 Walkaway Entertainment

AX: People don’t realize that you don’t need a studio budget to make an effective indie film – how do you feel cinema has changed over the last couple of years to make it easier for newcomers to get a start?

MITCHELLE: Really it’s the affordability of the technology. I own all my own equipment. I didn’t rent anything for the production. My entire studio costs less than $20,000. Which is more than most have lying around but still chump-change compared to what a Studio picture can cost. Post-production is possibly the most interesting part of the film. The entire movie was edited on a lap-top. A Mac Book Pro that I got off the shelf with Final-Cut Pro as the editing software. That’s it! Finally, with the Internet you can upload your movie and have it instantly viewable by millions of people.

JONES: Film festivals help. The internet helps. It’s so much easier nowadays to just independently release your film on DVD and tour it around various conventions. That’s what we’re planning on doing with PARANOIA.  And for the past decade, there’s been good enough technology out there, that micro-budgeted filmmakers can tell their stories without resorting to their movies looking like they were shot on videotape.  As much as I love having those old cameras.

AX: Being the Cinema Snob, how would you review your own film?

JONES: Ha!  Believe it or not, I sort of did. When Ryan gave me an early cut of the movie, I went through it picking out different things that someone like me – a guy who makes fun of movies for a living – would nitpick and make fun of.  Whether it was special effects work that looked cheap, or lines that should be cut, I was able to make some good notes on how to make the film the best it could be. If it ever came down to me reviewing one of my own movies as The Cinema Snob, I don’t think I’d have a problem with that. I do a lot of episodes on movies I like, and I don’t think The Snob would be a huge fan of some of my movies. Though this one is surreal enough, he’d probably really like PARANOIA.

AX: What other projects do you both have coming up? What’s your next film?

MITCHELLE: I have a new film that I am starting pre-production for a late summer shoot. Then Brad and I are looking to do a film together this fall.

JONES: I’ll be writing and directing a full length feature called CITY LIMITS, which is a sequel to an earlier film I made called MIDNIGHT HEAT, and Ryan and I will also be collaborating on a project this fall.  The goal is to raise money for our dream film, a post apocalyptic action slasher film called CLASS OF 86.