Home » Exclusive Interview: Malik Yoba is one of ALPHAS males 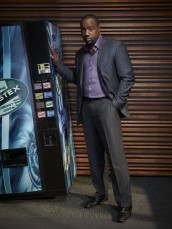 Exclusive Interview: Malik Yoba is one of ALPHAS males

In Syfy’s new series ALPHAS, airing Mondays at 10 PM, five very different people with unique mental abilities have been brought together to work for the government. The only one of the group who has previous government experience is Malik Yoba’s character Bill Harken, a former FBI agent who can summon super-strength at the cost of being depleted afterward.

New York-born Yoba has played law enforcement types before – he starred as NYPD Detective J.C. Williams on four seasons of NEW YORK UNDERCOVER and more recently as Jeff Goldblum’s deceased partner on RAINES. While Yoba has also portrayed an astronaut in the one-season series DEFYING GRAVITY, he considers ALPHAS his first real plunge into the science-fiction genre.

MALIK YOBA: DEFYING GRAVITY wasn’t really sci-fi, but it definitely skirted [with it] – we were in space, but I haven’t had an opportunity to do too much genre. It’s always been pretty much contemporary pieces.

ASSIGNMENT X: Has that been a matter of the roles that have been offered to you, or were you not interested in science-fiction until now?

YOBA: No, it’s really about what comes across [to the agent]. The reality is, I think that we continue to be challenged by the opportunities that come for brown people. That’s just the reality of what the business is, and so I think that we [as actors] have to be extra-diligent in saying “no” to things because they feel too familiar. But you stay in it for the long haul, not for the immediate thing. Obviously, you want to stay relevant and continue to work, but I don’t allow [being offered the same types of roles] to be a frustration. It just is what it is, and something like this, you do it and it could lead to something else that’s genre. A lot of times, people just have to see [the actor do] it. I haven’t done a lot of comedies, for instance. But I do a lot of hosting, I do a lot of improv – we do a lot of improv on the show, in fact. But one of the things I really want to bring to the character is much more a light, comedic element. I think if we could find that good balance, this could be something really special.

AX: Your character seems a little more grounded than some of the others who are his colleagues …

YOBA: Well, he’s an FBI guy, because he’s spent years in law enforcement, going through the training, was unceremoniously reassigned to this unit, in the early part of the show, I think he’s still struggling with that. He doesn’t necessarily like it [laughs]. Like I say a couple of times in the pilot, “These people are not professionals. You really expect us to get into the life-threatening situations? They’re not prepared, they’re untrained, they don’t carry guns.” But ultimately, he believes in the way the kid with the autism can actually help him, or the woman that can seduce people can help him. That’s part of what I think makes this kind of fun. 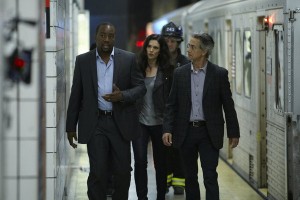 AX: How is it playing someone who has super-strength?

YOBA: I think that’s part of what the appeal is, because I think that if it was just playing exactly what I’ve done before, that wouldn’t have been as interesting, and that’s part of why I think I at first said, “Not really that interested,” because I thought it was going to be another kind of standard procedural. But then it proved to be something that was more interesting because of these quote-unquote powers that we have.

AX: Do we know exactly what happens to Bill when he exercises his strength, what that takes out of him?

YOBA: In the [first episode], we skirt it a little bit, we see that he is taxed, he gets depleted, we talk about, “Oh, you’re spiking.” His energy is depleted. So we’re not sure if it’s a muscular condition, or is it mental, is it respiratory? We’re going to play with that a little bit more to figure out what it is. I think it’s a respiratory thing, maybe a heart condition.

AX: Is it fun to play the super-strength scenes where Bill lifts cars and does things like that, or do you have to figure out how much making it look easy is too much and how little is too little?

YOBA: You see this body? I’m gonna use it [laughs]. It takes a while to figure out what that balance is.

YOBA: I really haven’t, and that’s the kind of cool thing. There’s no reference, which I think is cool. Like I said, some of my tragic flaw was approaching this initially thinking, “Oh, this is kind of like …” Actually, it’s not. It’s not “kind of like” anything. That’s been the fun part.