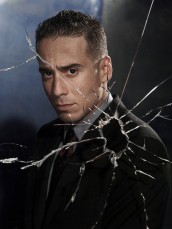 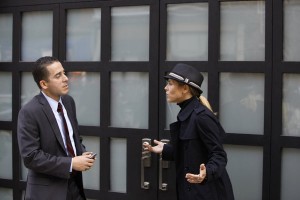 Bronx-born actor Kirk Acevedo has spent a good portion of his performing career playing people on one side or the other of the law. After costarring as a soldier in HBO’s landmark WWII miniseries BAND OF BROTHERS, Acevedo was a series regular in 46 episodes of HBO’s prison drama OZ as inmate Miguel Alvarez. He has guest-starred on the original LAW & ORDER, LAW & ORDER: SVU and LAW & ORDER: TRIAL BY JURY.

Even when he’s in genre fare, Acevedo seems to wind up in law-enforcement – he’s Fringe Division’s Charlie Francis in both universes on FRINGE. He’s also starring in Syfy’s upcoming TV movie COLLISION EARTH (no word yet on whether he’ll ditch the badge or not for this one). Now he’s a series regular as NYPD police detective Luisito Calderon on NBC’s recently cancelled PRIME SUSPECT. Acevedo gives us the lowdown on his legal eagle roles.

ASSIGNMENT X: You seem to be playing a number law enforcement characters. Is this a specialty, or …? 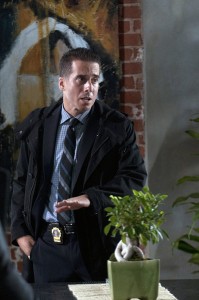 AX: What drew you to PRIME SUSPECT?

ACEVEDO: First off, the script was amazing. You read the words and, [to say this is] pure cliché, but the words jump out of the page, they really did. And Maria Bello. The difference between the other lady cops on TV is, they’re not Maria Bello. They’re somebody else after that. And then we have we have Pete Geraghty, we have Aidan Quinn, we have Brian O’Byrne.

AX: How is your character is distinctive from the other people in his squad room?

ACEVEDO: my character has anger management issues, has kids – it’s good stuff to feed off of and work on.

AX: Did you need to do any training for this part on PRIME SUSPECT, anything that you haven’t learned in your research for previous roles?

AX: One of your costars, Tim Griffin, has said that Aidan Quinn, who plays your squad leader, was instrumental in helping you guys get all around New York, that apparently a lot of police opened the doors for the PRIME SUSPECT production team …

ACEVEDO: Yeah. Mike Sheehan got Aidan Quinn and got all of us [in to talk with real police]. He was very instrumental.

AX: And how are the show runners on PRIME SUSPECT, series adapter Alexandra Cunningham and her fellow executive producers Sarah Aubrey and Peter Berg, to work with?

ACEVEDO: Oh, the best. In all honesty and sincerity, other than Tom Fontana [on OZ], the best.

AX: Will you be back this season on FRINGE?

ACEVEDO: I think I’m going to do two or three [this season]. They’re trying to work out the schedule.

AX: Is there any difference between playing NYPD and FBI, or is it just the tone of the shows?

ACEVEDO: A huge difference. The FBI are really more straitlaced, a little bit more by the book, not so much humor. ANew York City detective, there could be a dead body in front of you, and these guys go, [joking] “What is that?” “I don’t know.” They’re literally like, they’ve seen it, they’ve done it. That wouldn’t necessarily happen with FBI agents.

AX: Has there been anything on either show that’s grossed you out at all?