1-8-7 is actually Los Angeles Police Department code for homicide. However, the numerical is now so well known that it’s part of the title of ABC’s freshman drama DETROIT 1-8-7, which deals with a Detroit Police Department squad that investigates murders, with Michael Imperioli and James McDaniel heading the cast.

McDaniel, who plays Sgt. Jesse Longford, is no stranger to playing police detectives for ABC – he spent seven years on the network’s acclaimed NYPD BLUE as Lt. Arthur Fancy, where he became friends with writer David Mills, who passed away last year during the filming of HBO’s TREME. McDaniel was also on Broadway in the Tony-nominated production of SOMEONE WHO’LL WATCH OVER ME with Stephen Rea and he spoke recently with ASSIGNMENT X about his new series and his Broadway stint.

JAMES McDANIEL: It’s a wonderful play, a three-character play, three guys picked off the streets and thrown into a Lebanese prison. It was quite funny.

ASSIGNMENT X: Clearly, you’ve played all kinds of characters, but between DETROIT 1-8-7 and your years on  NYPD BLUE, you’re perhaps best known to the public for playing police detectives. Is this type of character something you actively seek to play, or is that just how it’s worked out?

McDANIEL: That’s how it works out. I find [playing police] is also a comfortable place for a lot of black actors. 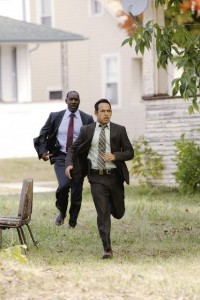 AX: What would you say is the biggest difference between Jesse Longford and Arthur Fancy?

McDANIEL: I think to a certain extent, Fancy is by the rules. This guy [Longford], he’s been on the force for like thirty years, so there’s a certain amount of burnout that’s there. I think the education levels are slightly different, because this guy came onto the force at a time where there were certain standards and practices. He’s just a very, very different man. His wife has passed away, he has two fairly grown daughters, so I’m kind of excited to get into that and find out what that all means.

AX: It’s been said that looking at Detroit from the air, it appears exactly like a war zone …

McDANIEL: No, it doesn’t. The dog-bites-man story is that Detroit is a horrible place and all that kind of stuff, but the real story is that Detroit is an extraordinary city. It’s the Paris of the North, that’s what it used to be called, the Paris of the North. I think it was the fourth largest port in the world. This is an extraordinary city that just happened to go through some hard times. We all have that. New York has that part. L.A. has a part called South Central, right? We all have that part, it’s just because of circumstances, that part of Detroit – because of the riots, followed by the collapse of the auto industry, it’s made that section a little larger than other cities, but the city is absolutely extraordinary.

Myself and my wife are enjoying it. [At the Detroit Institute of the Arts], they had the most extraordinary exhibit I’ve ever seen, called Three African Eyes, which was an artistic interpretation of African through the colonization, but through the eyes of Africans, and it was an absolutely amazing structure. It’s covered by Carrera marble on the outside, with matching grain and on the inside, it’s the same thing, with matching grain and it’s a state of the art facility. It was an absolutely wonderful exhibit. I’ve read every single word and it was great. It’ss an extraordinary thing. But there’s so much like that in Detroit.

AX: Does working on location in Detroit inform your performance in any way?

McDANIEL: Oh, most definitely. We had to shoot NYPD BLUE here in L.A., and then we did exteriors in New York, and there was always a special energy that we had when we went to New York. It has everything to do with [the location] – I mean, imagine shooting TREME [concerning and filmed in New Orleans] in Vancouver. It would be tough.

AX: Speaking of NYPD BLUE and TREME, can you talk about the late writer David Mills at all? He did a lot of writing for your NYPD character …

McDANIEL: Yeah. It was more of a personal relationship, because at the time that David Mills came onto our show, he was the first black writer that had ever written for Steven Bochco Productions. We had a very special relationship. We did some pretty extraordinary things together. We won a Peabody Award together. We got our first Emmy nomination together. He’s a wonderful individual, he came from New York City, I’m from New York City, our aunts wound up knowing each other. So I miss him greatly. He was an extraordinary human being. He was doing exactly what he wanted to do since he was a child. That’s the job that he actually got, was to write television, write dramatic television. That’s what he wanted to do, and he was doing it, and he was doing it very well, all the way up to the end. It was quite a shock for all of us. It was quite a shock. He’ll be missed.

AX: Did you stay in touch after NYPD BLUE ended?

McDANIEL: Yeah, we would from time to time. I always wanted to do something with him, but we were always going in different directions. I knew [there was a connection] from the get-go. Do you know how he came to [NYPD BLUE]? [Executive producer] David Milch had won an award – I think it was the Humanitas Award – and they got into it a little bit there and [Mills] wound up being on our staff, which was just a very interesting story. Somebody else can tell you what that story actually is. So I knew that he was coming, I knew why he was coming, so we had a very close relationship and he gave my character a lot. He’s a black kid from Washington, D.C., I’m a black kid from Washington, D.C. So we had a lot in common.

AX: Have you stayed in L.A. or relocated to Detroit?

McDANIEL: Well, I lived in Harlem for thirteen years before I moved out here to do [NYPD BLUE], so I lived here for thirteen years. I still have my place here, but I find myself here very rarely. Right now I live in Birmingham, [Michigan] but that’s where we landed. But if we can go forward, then there are other neighborhoods that I have my eyes on.

AX: What’s your chemistry like with Michael Imperioli in DETROIT 1-8-7?

AX: And can you talk at all about the differences in the way that the show runners work on this and on NYPD BLUE?

McDANIEL: Well, one of the advantages that we have is, we have what’s called a producing director. I think it’s kind of a new title. [On DETROIT 1-8-7], it’s Kevin Hooks and he’s directed our first regular season episode, and he stays with the show, so as the other directors come in, he trains them, gets them up to speed, so that we can have a consistent style and look for the show. I have high hopes for it.