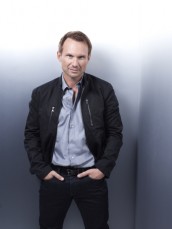 The actor talks his new series, acquiring Captain Kirk's chair for his character and hoping the show will visit Skywalker Ranch

BREAKING IN concerns Contra Security, a firm that is hired to test various security systems by performing the title action. Created and executive-produced by Adam F. Goldberg and Seth Gordon, the new Wednesday night half-hour comedy on Fox features a troupe of deft comedic young actors as the Contra employees. Christian Slater plays their somewhat mysterious and prankish boss, Oz, who likes to surround himself with eclectic objects – for instance, Captain Kirk’s command chair from the bridge of the Enterprise. Slater 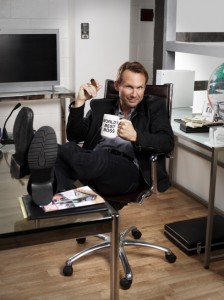 has starred in two other TV series, NBC’s MY OWN WORST ENEMY and ABC’s THE FORGOTTEN, but BREAKING IN is his first regular gig in TV comedy.

ASSIGNMENT X: Would you say Oz is the most complex character you’ve played on television, just in terms of all his secrets?

CHRISTIAN SLATER: Let’s see. I think doing [MY OWN WORST ENEMY] for NBC was quite complex because I’m bouncing back and forth between the two characters [sharing the same body], so there was a certain level of complexity involved in that particular show.

AX: But the characters you played on MY OWN WORST ENEMY each had consistency within the individual persona, whereas your character here is a little more mercurial, albeit being the same guy …

SLATER: That’s true. I mean, there is a layer of mysteriousness to this guy, which I like, so yeah, sure, I’ll go with you on that. I’m looking forward to continuing to hear the interesting concepts that Adam Goldberg has to write for us.

AX: Was there anything you learned on the pilot that you and any of the other key players felt like you wanted to tweak or change going forward into the show proper?

SLATER: Honestly, the pilot is the pilot. It worked. It was funny, it was charming, it went by quick and we kind of dabbled with bits and pieces here and there, so I think it all works.

AX: How did you manage to get the Captain Kirk chair for Oz’s office?

SLATER: It was a lot of work, let me tell you because you can have an idea like that, but you’ve got to get clearance, and you’ve got to get clearance from some pretty important people. Now, I’ve been in this business for thirty-three years, so I think I know a lot of people and I have more friends than I even knew that I did have, so I was able to reach out to a couple of people, and this person reached out to that person, and then another person reached out to another person. These things never come together when it’s lawyers asking lawyers. It has to be more on a personal level. 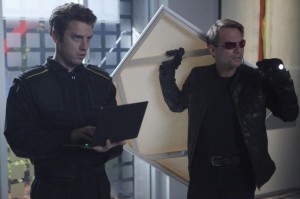 AX: Does your character Oz personally do any of the breaking in, flying down from the ceiling on wires stuff?

AX: BREAKING IN is breaking in to Skywalker Ranch?

AX: Well, since Adam F. Goldberg co-wrote FANBOYS, which was all about breaking into Skywalker Ranch …

SLATER: That’s correct. He’s not new to the idea, he’s a big fan of ROBOT CHICKEN, obviously, so he’s open to having fun and I have a little bit of a relationship with the guy. We’ll see, but these are certainly all the kinds of things that are possible with this type of show.

AX: Anything else we should know about BREAKING IN?

CLICK HERE for a review of BREAKING IN’s pilot episode