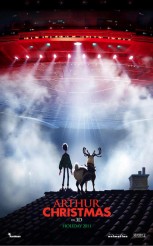 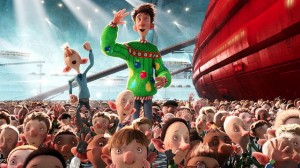 While most people are getting ready for Halloween, Sony Pictures Imageworks prepared for Christmas on their animation studio lot in Culver City, CA on Monday afternoon.

The occasion was a sneak peak of the first thirty minutes of their new holiday themed animation film ARTHUR CHRISTMAS directed and co-written by Sarah Smith about the well-meaning but useless son of Santa Claus who embarks on a journey with Grandsanta to deliver the one present that was missed during Santa’s latest world-wide jaunt.

The comedy is a co-production with Aardman Animation Studios (famous for the WALLACE AND GROMIT shorts and films). And even though the film definitely has a British sensibility and voice cast, the visuals on display were quite impressive.

Santa’s operations have been modernized with help from his tech savvy other son Steve – with Santa now being able to travel the globe in a decked out cloaked spaceship and millions of daredevil elves.

The footage shown was quite funny – using familial dysfunction in the Santa household to maximum effect.

Meanwhile, to get guests (and their children) in the spirit of Christmas, the studio created a winter wonderland (in Southern California no less) where carolers sang songs, fake snow was important onto the campus, food and desserts were served and activities ranged from face painting, cookie making and balloon animals.

Also on hand at the event was the film’s co-screenwriter Peter Baynham – who ironically enough penned the recent ARTHUR remake. He spoke with ASSIGNMENT X in this exclusive interview about venturing out into writing for a younger demographic and the appeal of bringing an edgier sensibility to a holiday film. 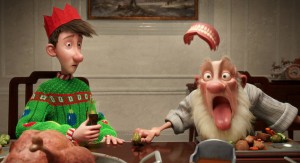 ASSIGNMENT X: There have been so many children’s films set at Christmas, how long did it take to come up with something that would be different?

PETER BAYNHAM: I never sat down and thought of it as a kid’s film. I’ve been working on slightly more adult fare, but literally a few years ago I was sitting down muddling over what to do next. I think I was thinking about “how is Christmas done?” I have a slightly pedantic imagination and I’m sometimes the worst person to sit through a film and it’s stuff no one else cares about. And so I started thinking how Christmas is literally done and once you have that little bomb go off in your head it gets quite exciting. You start thinking “If Santa can’t do it with a sleigh and eight reindeer – how does he do it?” Well, it would have to be a mile wide spaceship and it would have to have a million elves. Eventually Sarah and I sat down, did all of the math. If Santa started in the Southern most tip of New Zealand and zig-zagged around the world for twelve hours with a million elves in a mile wide spaceship, you could just about deliver to all the kids who have written to Santa. It was more that, rather than whether it was a kid’s film or not.

The second thing was, they say “write what you know” and I started to think “well what if Santa had a family and had a son who was a useless, nerdy all-over-the-place son like me.” My wife can’t sit in a car with me because [she’s worried] I’m going to crash because I’m so all over the place and spaced out. I’m a lot like Arthur. He’s based on me. I thought “what if Santa couldn’t deliver all the presents and it was left to his useless son to take over and deliver the last present?” It was a case of the ideas coagulating and coming together. And I said, “I really wanted to do that.”

So many animated movies come out, hopefully ours is different – and you think, if you do a good one, audiences will come. 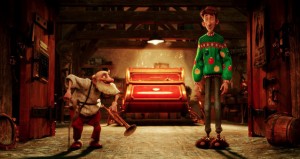 AX: The animation is pretty incredible too – a lot of detail and a lot thought went into this world.

BAYNHAM: The process of development of the physical characters was years unto itself to go from basic drawings, from clay models to models done within computers and animating them. We were also lucky to make this film at a time when Imageworks has just gone to another level of finish and beauty. The first scene I ever saw fully rendered and fully lit was the scene where they go in and see the original sleigh. We sat there and thought “this is exciting.” Then you’re thinking, “these same people are going to do the S1 and all the crazy stuff that goes on in the movie.” Ultimately it is a bit of a road movie as the characters set off and go anywhere but the right direction. They end up in Africa and Mexico and go on this crazy mission. What the animators have delivered – we are incredibly lucky to have people like that doing this.

AX: Was there ever an inkling of “let’s do a musical number?” Most animated movies can’t resist it.

BAYNHAM: It was weird, I was watching JAMES AND THE GIANT PEACH a couple of nights ago. I haven’t ever seen it, and I loved it, but I didn’t realize it was a full-on musical. You do have tempting moments. Not seriously here – it probably wouldn’t be the nature of the comedy of this. You wouldn’t want to have somebody burst into song and singing what they want from life. Even though it’s a Christmas film, that’s one of the dangers of Christmas films. You want them to be big-hearted, and by the end we have a big-hearted, great message, but we do it on our terms which isn’t cheesy and isn’t fake. We didn’t want to risk anything where we tip over into something else. We just wanted to tell a good, funny, big, nice story.

AX: How much was Aardman involved?

BAYNHAM: I originally came up with this idea and went to pitch it to Sarah Smith, who was doing script development for Aardman at the time. She then became the director of it. She was very passionate as well. It’s mostly a British cast, and we did bring a British sensibility to it. It’s a different type of movie from WALLACE AND GROMIT. It’s a slightly different type of humor, but you hope it keeps that warmth and silliness.

AX: When you’re a writer, you have your favorite characters, but when you started seeing things come to life with the animation, was there a character you fell in love with more?

BAYNHAM: I love them all, but I found Grandsanta a lot of fun to write, because he’s naughty. We wanted to base him on grandparents that Sarah and I had who would say the most awful things at the dinner table. They would sort of say terrible, un-P.C. things but they would nail things that were bubbling under the surface of the family like when he says that thing about “you’re never going to be Santa unless you knock him off.” I love his story, because he goes with Arthur, and you find out he’s up to know good and he’s hijacked the mission to prove himself.

Arthur was a lot of fun as well, because he was harder to do initially. It’s tougher with those characters – the protagonist who cares. It’s a challenge to make them fun. That’s why we came up with things like “he has a different Christmas sweater for every day of the year and he has a 365 day Advent calendar and these ridiculous Christmas slippers.” We liked the idea that he is like the train driver’s son who is obsessed with trains. Even though they live and breathe it, it’s fascinating if you think what it would be like up at the North Pole in that secret base in May. Arthur is not really part of it, but loves it all and carries the spirit of it at the end.