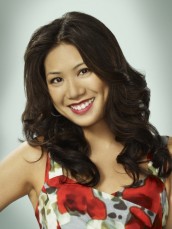 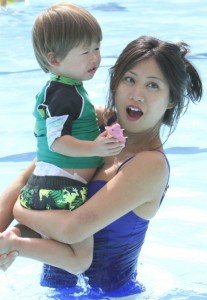 TRAFFIC LIGHT, on Fox Tuesdays at 9:30 PM, is a series that proves some things are universal. The comedy is adapted by Bob Fisher and David Hemingson from an Israeli show about three male friends who constantly find time to talk with each other, even if it’s over the phone in the car. In the Fox version, David Denman and Liza Lapira are happily married couple Mike and Lisa, Nelson Franklin and Aya Cash play somewhat nervously cohabiting couple Adam and Callie and Kris Marshall plays single Ethan.

Lapira had a recurring role as programming assistant Ivy on Fox’s DOLLHOUSE before landing on TRAFFIC LIGHT. Other previous credits for the New York-born actress include CLOVERFIELD, REPO MEN and recurring roles on NCIS, DEXTER and HUFF. Lapira (whose first name is pronounced LEE-za, not LIE-za) talks to ASSIGNMENT X about her new comedy and her recent tenure on the Joss Whedon show.

ASSIGNMENT X: Did Fox say they wanted to find another project for you after DOLLHOUSE ended, or was this just a straight audition?

LIZA LAPIRA: It was just serendipity. I’ve worked with Fox before, but this was just a regular, run of the mill audition and it worked out well.

AX: The TRAFFIC LIGHT creators have said that the three male leads on the show represent the different traffic lights – the bachelor is green and the couple who are just moving in together are yellow. David Denman, who plays your character’s husband, says his character is generally happy with where he is in life …

AX: Do any of the characters ever wish they had different romantic lifestyles?

LAPIRA: We do have an episode where we address that, and it’s cool in that these three guys essentially switch lives for the night, and at the end of the episode, they’re sitting in a bar, going, “I’m exactly where I need to be. I should be married.” “I should be single.” “I should be with my girlfriend.” 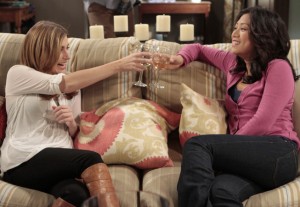 AX: Had you done half-hour sitcoms before?

LAPIRA: I was a guest star, so yeah, I did the finale of THE PARKERS, so I’ve done sitcoms. I’ve also done single-camera dramedies, which is very similar to this. It’s not shot in front of a live audience. It’s single-camera, it’s very much like an episode of MODERN FAMILY in that it’s very quiet and suddenly the camera finds you.

AX: To ask a little bit about DOLLHOUSE, because a lot of  our readers love DOLLHOUSE …

LAPIRA: As they should.

AX: Do we know what happened to your character Ivy after her boss Topher said, “Go find a life”?

LAPIRA: What happened to my character? It’s left up to the imagination, but in terms of me and what I expected, Ivy lives. Topher essentially saves her life. He says, “Don’t be like me.” He’s devastated by what has just happened, his girlfriend was just shot in front of him, he’s in shock, and he says to her, “Don’t turn out like me.” He sends her off into the night.

AX: Do you know if Ivy was always intended  to be on the show as much as she was, or did you sort of sparked a bit, so they wanted to write more for the character?

LAPIRA: I don’t know. I don’t think it was planned to be what it was, so I think the writers just threw me a bone and were very generous to me.

AX: Even though DOLLHOUSE was certainly not a comedy, you and Fran Kranz, who played Topher, had hilarious chemistry together …

LAPIRA: Thank you. He’s a wonderful actor. As much of a comedic chemistry as we had, at the end, he broke my heart. It was a beautiful kind of devastation, that last scene where he sends Ivy off, knowing, or halfway knowing, that he’s going to die and not make it.

AX: When you went on DOLLHOUSE, did you think it was going to go for two seasons?

AX: Do we know whether Ivy was a Doll?

LAPIRA: She was not. She was a human. I discussed this with the costume designers, because they would put me in these wonderful, Doll-like outfits – she had Doll envy. She wished she was, but she was not.

AX: Do you find different rhythms working on a half-hour show and an hour show?

Click on the link: for AX’s interview with TRAFFIC LIGHT star David Denman

Click on the link: for more DOLLHOUSE interviews and news