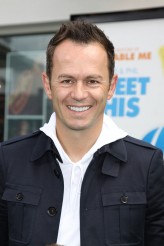 The actor talks working on three of the four PIRATES films 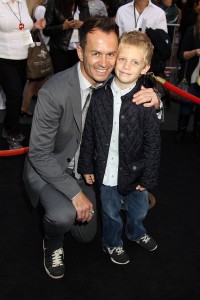 ASSIGNMENT X: Have you been going back and forth between England and the U.S. for awhile?

GREG ELLIS: No, I came over in ’95, ’96, and I’ve really been here ever since. I occasionally go back over to work, but I live in Los Angeles now.

AX: In the first film, you were “Officer.” At what point did the character get a name?

ELLIS: Well, I actually had a name in the first movie. [Theodore Groves] was my name, although it was never said. I think it was used more in the third movie, and it’s used quite a lot in the fourth movie. And I think I got promoted from Officer Groves to Lieutenant Groves. Now I’m Lieutenant Commander Groves.

Geoffrey Rush and Greg Ellis in PIRATES OF THE CARIBBEAN: ON STRANGER TIDES | ©2011 Disney Enterprises

AX: There seem to be some of the cast moving over from the first trilogy to the new narrative, and then a lot of new folks. Is Lieutenant Commander Groves taking over from Jack Davenport’s Norrington character in the previous films?

ELLIS: Well, he was the ranking commodore, so I wouldn’t say I’m taking over from him. There were five of us back from the last movie. Johnny Depp, Geoffrey Rush, Kevin McNally, myself. Damian O’Hare.

AX: How was the reunion?

ELLIS: It was great. We’d all come out on the first movie and of course, having done the third movie, I had been in touch with over time Johnny and Geoffrey and Kevin. We hadn’t actually seen Damian in a few years. So it was nice to see him after so long, and it’s always nice – we have so much fun making these movies. We’re boys, and we’re in a pirate movie. What’s not to love? There was a whole influx of new characters and actors this time around, which was nice. I am working on behalf of the King [of England] to get to the Fountain or Youth. I’m actually sailing with Barbossa [the character played by Geoffrey Rush, who is now captaining a Royal Navy ship]. I’m keeping a watchful eye on him.

AX: When you all finished making the third film, did you think, “Well, okay, that’s it for PIRATES,” or did you think, “Oh, this is so successful, they’ve got to do more”?

ELLIS: I thought that would maybe be it for rounding that storyline off, but I didn’t think that was the end of PIRATES OF THE CARIBBEAN movies. I mean, the challenge was finding something new and interesting and exciting to re-energize the movies and I think that’s definitely been found with Terry Rossio and Ted Elliott’s script. It hearkens back a little bit to the first movie, just the simplicity of story in terms of – the first one was fun, you didn’t have to think a great deal, there were amazing action/adventure sequences, there were good laughs, there were good guys and bad guys and good bad guys, and I think that there’s a sense of that with this movie, that it’s fresh, it feels fresh.

AX: Did you think that you would be involved in another one after the third one?

ELLIS: I didn’t know, honestly. I hoped and I’d heard along the grapevine that I might be, and even when I found out that I was written into the movie, having a new director who had never worked with me before, he needed to be convinced and I think he checked out the footage from the first movies and then he must have been convinced, because he invited me along to join the fun this time around.

AX: The first three films were directed by Gore Verbinski, but TIDES is directed by Rob Marshall. Is there a different feel to this film, because it’s a different director?

ELLIS: I think so. We missed having Gore around, but Rob stepped into the directorial shoes fantastically well, was very much liked by everyone and has an amazing eye and is super-talented, so I think people were excited to see [how he was] keeping elements from the PIRATES movies gone before that made them so successful and also giving it the new twist and the new characters and and a new vision.

AX: Are you playing Groves more or less the same as you did in the earlier films?

ELLIS: Yeah. There’s growth within the character. He’s essentially the same personality. Groves is a man who serves king and country first, he has some ethical scruples and a deep yearning for adventure on the ocean waves, but I think somewhere inside, he longs to experience life as a pirate. If there was a competition on board for a weekend as a pirate, Groves would be desperate to win. He has an admiration and respect for Jack Sparrow [Johnny Depp’s character]. I think that annoys his superiors. I know it annoyed Norrington in the first and the third.

AX: And are you more involved with the special effects this time around, in terms of having to act against green screen, or perform opposite tennis balls on sticks?

ELLIS: Not really at all. We were very lucky to be filming in Hawaii, on the beautiful islands of Kauai and Oahu, and it was a lush jungle landscape and beautiful sandy beaches. We filmed where they filmed FROM HERE TO ETERNITY, we filmed in London at Pinewood and I can’t think of any green screen, or any situation where we had tennis balls on the ends of sticks, which is quite marvelous.

AX: Were you filming in a tank, or were you ever actually out in the ocean?

ELLIS: We’re always out in the ocean. There wasn’t one time that we were in a tank. Geoffrey, Kevin and I were always out at sea. In fact, there was one time we were filming off the coast of San Pedro, [California], heading towards Mexico, and the continuity person said we couldn’t turn round, so I think we were closer to Mexico than we were California at one point. It was a fun day’s filming, and then on the way back, we actually did some whale-watching. There was a whale, there were some dolphins – it was pretty amazing.

AX: Have you learned anything about seafaring lore in the course of being in these films?

ELLIS: Yes. I’ve learned that pirates have a lot more fun, but their lifespan is shorter. I’ve learned that the Royal Navy wardrobe certainly was not that comfortable – too many layers and too tight-fitting. Legal protocol and naval protocol gets in the way sometimes. In terms of ships and rigging and battles and cannons and swashbuckling and sword-fighting and pistols and interesting trivia, they didn’t use their guns, their muskets, at long range. It was only close. The aim of them was terrible. They would never fire straight, they would never shoot straight. You’d wait until someone was up close. You’d think if someone were up close, you’d just thrust your sword through them, but you wouldn’t – you’d just go out and shoot them at close range. It’s nice to do  [the films], because you do get to rediscover parts of history.

AX: Now, you also do a lot of voice work for animation and videogames – you played a lot of different characters in DRAGON AGE. Do you find you have a facility for doing different voices?

ELLIS: It developed once I got into the animation world. It’s tapping into the silly side of you. [Russian accent] If you’re playing a Russian character, you have to have this voice [normal voice again], you know what I mean? Sometimes it’s just [what happens] in the session as well. You can be doing one particular character – there’s a show called BATMAN: THE BRAVE AND THE BOLD and Andrea Romano, who is a genius voice casting director in the animation world – she’s not old enough to be a legend, but she still is a legend, and she will throw a different character at you, like, “Oh, let’s try this,” or you’re playing Dr. Fate or Mr. Megamind or whoever it is, and you look at the picture and you formulate and you work with her and throw out some ideas and she’ll shape it and craft it like clay and then you’ll have the voice of the character.

AX: You were also in the performance-capture feature film BEOWULF for Robert Zemeckis. Do you do any motion capture work for the videogames as well, or is it just voice work?

ELLIS: It’s mainly voice work. I’ve done the odd thing here and there for motion capture. I did a game called RESISTANCE: FALL OF MAN. I did the first one and the second one, and I just finished doing the third one. There was a small amount of motion capture involved with that. And BEOWULF was performance capture.

AX: Is it inhibiting to work with all those performance-capture dots on your face?

ELLIS: It can be, and it takes time to get ready. It’s just a different way of filming. It’s a little cold in terms of, it’s nice [in live-action] to inhabit the costume and have the makeup of the character. On [BEOWULF], there was one day where we did put the costumes on and felt like the characters, but then after that, you put in dots. Even the horses were covered in dots. We were in a very cold soundstage with a hundred-plus cameras all around.

AX: You were also on Season Three of 24. How was that experience?

ELLIS: Oh, I had a great time. The 24 cast and crew was incredible. I just recently worked with Kiefer [Sutherland] again on a Web series called THE CONFESSION. It’s a dramatic Web series, which I’ve not actually done before or been involved with. It didn’t feel any different than doing a TV series, to be honest. The production value was all there, the money was spent and it felt like a topnotch production. And Kiefer’s just fantastic. He’s super-professional, amazingly talented, very intense and he never gives less than the best.

AX: On 24, you were a person doing something fairly destructive. As Groves, you’re fairly upstanding. Do you have a preference for one or the other?

ELLIS: Oh, yes. What do you think? [laughs] I think character roles are for me far more interesting and fun than lead roles or leading men.

AX: Does Groves ever get to break out of his Royal Naval stiffness and gets to have a little fun?

ELLIS: That might be a spoiler, but I will tell you that leading up to the movie, during the filming of 3 and of 4, I would say to Terry Rossio that with Lieutenant Groves love of, or admiration for the pirates, it might be nice at some stage to give him an experience as a pirate maybe. Maybe he will switch sides or he gets captured – just the experience. Whether that happens, or what happens, who knows.

AX: Anything else you’d like to say about your experiences on the PIRATES films?

ELLIS: Ian McShane as Blackbeard [laughs]  just tears up the screen. Blackbeard’s such an iconic character, so it takes a big, versatile, experienced actor and he more than fits the bill and does an amazing job. It was a great time working with him. Such fun.  When the two of them [McShane and Rush have scenes together], it’s step back and enjoy yourself. “Oh, yes, I’m in a scene, I’m acting now.” I’m enjoying watching them. The PIRATES OF THE CARIBBEAN movies are just amazing adventures and it’s so much fun to be involved.

Click on link: for AX’s PIRATES OF THE CARIBBEAN: ON STRANGER TIDES review