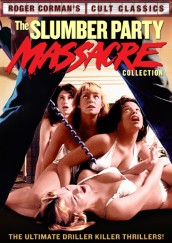 Great old school American horror despite the fact these are subpar slashers, but with some good extras 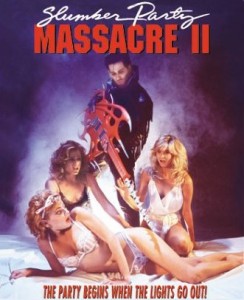 Adam Green may be the modern day master of old school American horror with his HATCHET movies and FROZEN, but back in the day, that title was held by a number of different directors.

Surprisingly, Roger Corman was one of them. Not saying that his work was always the best or most entertaining but when it came to delivering serial killers and hot chicks with little to no clothing, he was a master at it – something the ’80s golden era of slasher films had in spades.

Now, we get to relive all of his serial killer works with the SLUMBER PARTY MASSACRE COLLECTION – three films he produced during the heart of the slasher craze – collected all in one two-disc set.

Again, I state that the movies themselves aren’t the best in the slasher genre, but when we talk about old school American horror, this is it.

In the original (SLUMBER PARTY MASSACRE), a group of friends decide to have a party together at a remote cabin when one of the girl’s parents goes out of town. Luckily, for use, they do this after an extended shower scene with a whole truckload of naked chicks with gratuitous filming. Unfortunately for them, a serial killer tags along and one by one takes them and a group of boys looking to crash the party out.

The original is the best of the trilogy here by far. It actually packs some scares into the film as well as some decent amount of gore, but in the annals of slasher films won’t make anyone’s Top-10. 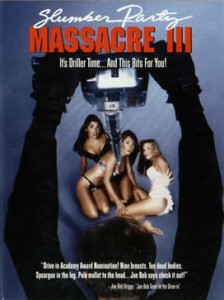 SLUMBER PARTY MASSACRE 2 takes a completely different approach by giving us a slew of dreams from the main female about an upcoming slumber party as well as a rocker with a guitar/drill combo. After a whole slew of boring conversations and way too many “shock” dreams, they finally make it to the cabin where they are headed and soon the serial killer rocker with the drill guitar makes his appearance. But is it really him or has she just lost her mind and is killing her friends and boyfriends? We never really know but the last scene shows her in a mental institution, which leads us to believe that’s what has happened.

Finally, SLUMBER PARTY MASSACRE 3 is the weakest of the trilogy that doubles the cast and the deaths, but the deaths are so squeezed in and convoluted that it makes for a piss poor slasher. That is, when the deaths actually begin. While there is one right at the beginning of the film, it takes another 35 minutes for any action to get going. And the deaths are diluted so you miss on all of the good stuff that most gore hounds or just horror hounds enjoy.

The very cool thing on the DVD is the three-part documentary, entitled “Sleepless Nights: Revisiting the Slumber Party Massacres,” that brings together the cast and crew and discusses the legacy of the films, their place in the 80s golden era of slasher films and how they went about doing the films. There is also an extensive photo gallery on each film from pictures on the set and an essay on the films that also explores the legacy of the trilogy.