DANCING WITH THE STARS Recap: Wendy Williams is the second elimination in Season 12 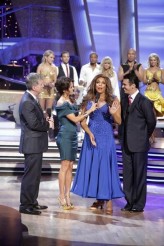 DANCING WITH THE STARS Recap: Wendy Williams is the second elimination in Season 12

Bye, Bye Wendy - it was a given she wasn't going to make it.

No surprise tonight, Wendy Williams is to dance no more!

Hines Ward and Cheryl Burke were rewarded the encore of the night and then heard they were the first to be saved on the third week of DANCING WITH THE STARS – Season 12.

The other top scorers of the night, Petra Nemcova and Dmitry Chaplin were also quickly saved. When OneRepublic performed the house was pumping, but most were still talking about Maksim Chmerkovskiy and Kirstie Alley’s spill the night before. Apparently, Chmerkovskiy’s thigh muscles gave out and he plunged to the floor with Alley in his arms. The two quickly recovered and saved themselves from elimination tonight.

A video segment with the couples behind the lenses was an insight into what inspires and motivates the couples off the dance floor and in between rehearsals.

The pros also hosted a video discussing the other celeb dancers and their strengths on the dance floor. One Republic returned to perform again with, yes, they are back…. the DANCING WITH THE STARS Dance Troupe. And young Disney star Selena Gomez also sang a diddy, channeling her contemporary rival Nickelodeon’s Miranda Cosgrove.

In the end, the elimination was neither shocking nor undeserved. And now the diva talk show host is free to travel cross country for the sights and scenery and not for rehearsals.

As to who looks likely to take home the prize in the end, this season truly is and will be the most unpredictable of all 12 seasons. Every week brings a new story and a new leader. Who will lead the dance pack next week? Stay tuned.