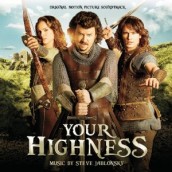 After the somewhat unintentional hilarity of the TRANSFORMERS movies, Steve Jablonsky gets to score an outright gonzo take on ’80’s sword and sorcery films, with all of the sound and fury he usually applies to Optimus Prime. And that’s perfect when it comes to playing this unabashedly rude fantasy spectacle for real.

Like a composer who’d been subjected to CLOCKWORK ORANGE-like viewings of THE ADVENTURES OF ROBIN HOOD, THE PRINCESS BRIDE, KULL THE CONQUERER and WILLOW, then turned loose on the world, Jablonsky wreaks loud havoc with every musical cliché in the genre book, as reworked for a rock orchestral world it never made. And darn if that check list of sword-ratting brass, moaning voices, exotic percussion, Medieval instruments and gigantically heroic adventure music don’t sound completely spot-on with knowingly satirical energy- right down to those wonderfully goody LADYHAWKE-esque synth grooves. More than just a big, loveable musical prank that’s almost too serious for its metal britches, YOUR HIGHNESS captures the energy of retro fantasy cheese, albeit with rousingly melodic music that makes you believe in HIGHNESS’ well-made reality, even as the performers are making F-bomb mincemeat out of it.

Sure YOUR HIGHNESS didn’t set the box office ablaze like the TRANSFORMERS or the Michael Bay horror remakes that Jablonsky’s more popular for. Yet there’s no better example, or perhaps more entertaining movie, that Jablonsky’s scored so far, one that reveals just how many styles he’s capable of playing, especially when the music (or movie itself) doesn’t get the meta-megaplex joke. Plus, you get James Franco warbling over Zooey Deschanel’s dulcet tones for “The Greatest Most Beautifullest Love Song In All The Land,” a ballad that has Franco being funnier in one minute of music than he was for three plus hours at this year’s Oscars.