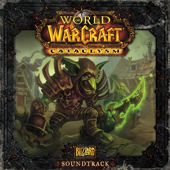 While I don’t know if I’ll ever be a WORLD OF WARCRAFT addict in line for a pwn’ing, there are certainly enough gigantic stylings on this album to suck in a game music novice, let alone anyone who appreciates operatic fantasy scoring. That’s fitting for a CATACLYSM which unleashes a dragon who’d give Smaug a run for his money into WOW’s massive on-line universe, allowing the composing team of Russell Brower, Derek Duke, Neal Acree, David Arkenstone and Glenn Stafford to suit up in ragingly melodic armor.

CATACLYSM is awash in a thrilling tone familiar to anyone who’s ever imagined themselves a manna-made hero in a LORD OF THE RINGS-ish universe, battling with your band of brothers against thousands of creatures to the majestic tones of ancient choral hosannahs, clanking castle-siege percussion and heroic themes.

Where Howard Shore’s approach to that kind of Middle Earth could be gravely dark, CATACLYSM is a bit less imposing. It’s more about the fun of taking on The Enemy as opposed to the saving-the-universe jeopardy of it all, allowing bits of eccentric humor, and gentleness to play their part in over 70 minutes of all-encompassing nobility and scaly evil. For anyone who doubted that videogame music couldn’t have the orchestral blast of a full-on Hollywood epic, CATACLYSM’s powerful recording lays any remaining doubts to ash.