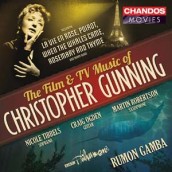 In his four-decade and counting career, Christopher Gunning has been a stalwart of the English scoring scene with a wide variety of television and film work, his music evoking a lush symphonic sound that will nicely remind listeners on these shores of the late John Barry.

Now with the success of what might be his most moving, and heartfelt score for the Edith Piaf biopic LA VIE EN ROSE, Chandos has taken the opportunity to record a treasure trove of Gunning’s greatest hits with the BBC Philharmonic, selections that are no small revelation of the composer’s  lassically-trained talents, especially now that he’s been given the opportunity to revise them as lengthy concert suites.

Inspector Poirot gets playful saxophone jazz with his “Variants,” “The Rosemary and Thyme Caprice” evokes the bucolic sound of “Greensleeves,” a violin swoons with the period attraction of “Firelight, “Cold Lazarus” pounds in bombastic action, “Pollyanna” has a playful, pigtail sense of flute and string adventure, while the ability to elaborate on “La Vie En Rose” turns Piaf’s turbulent life into a near-mad French waltz. But among the thematically lyrical delights on hand, “When the Whales Came’ impresses the most with its haunting female voice, slowed-down whale songs and surreal string effects, both of which evoke the animals’ awesome beauty, as heard echoing from the depths of the Debussy sea. Gunning’s FILM & TV MUSIC is an impressive revelation of his talent that will hopefully keep netting bigger fish. In the meantime, I can only hope a second compilation might include Gunning’s HANDS OF THE RIPPER and DAY OF THE TRIFFIDS in the bunch.

Waltz with Gunning and Piaf HERE