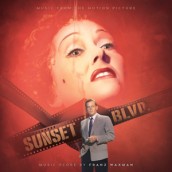 If it was only talk that helped to kill the silent movie stars, it’s likely that some of them may have been able to squeeze a few more years out of the goggle-eyed mooning and over-expressive hand gestures that passed for screen acting. But when the rapturous strains of Eastern European émigrés like Erich Wolfgang Korngold, Max Steiner and Franz Waxman joined with the newfangled dialogue recording and sound effects, the silent stars were indeed shot deader than the screenwriting lothario who messes with the wrong Hollywood cougar in 1950’s SUNSET BLVD. So it would be fitting that one of the best gunsmiths of said orchestral weapon would be used to bring new, lush life to one of the sirens he’d previously helped murder, let alone compose the score to what still stands as the most glorious, and cinematic poison pen letter ever written to Hollywood.

It’s also no small irony that Waxman helped establish the romantically florid musical language of Hollywood’s golden age with his score to 1935’s THE BRIDE OF FRANKENSTEIN, whose titular female stands next to BLVD’s Norma Desmond as an icon of ghastly sensuality. BLVD. is most definitely a musical descendent of BRIDE’s knowingly florid tone, given the added attraction of serving up a healthy dose of jazzy film noir heat, a pulp energy that was also becoming the specialty of BLVD.’s writer and director Billy Wilder.

A fellow refugee from a dictator with no sense of humor, Wilder’s best work in films like THE LOST WEEKEND and DOUBLE INDEMNITY were smack-downs of two-fisted, hard-broiled dialogue and fatalistic situations, all packing a subversive satire that reached its bitchiest heights with BLVD.’s deluded grand dame, one who inhabits a Hollywood castle of broken dreams that Dr. Frankenstein would be proud to call home.

Hollywood loves nothing better than being shocked at its own excesses, which helps to account for BLVD.’s 1951 Oscar wins for Best Score, Screenplay and Art Direction (among its eight other nominations). Surprisingly with all of the good re-performances and crappy bootlegs that have come out over the last fifty-nine years since, we haven’t gotten an official release of Waxman’s original tracks until now. But if this kind of a wait can said to have been worth it, than the passion of numerous fans has been paid off handsomely by Counterpoint Records, whose lavish packing and the best possible sonic production values would make Norma, let alone Franz, proud to make their grand entrance to a horde of flashing lights- let alone the fans who were enticed into film score appreciation by BLVD.

With most tapes from SUNSET’s era having turned to glue, it’s no small miracle that BLVD. sounds as good as it does for an archival presentation. And the spinning car wheel vibrancy that the “Prelude” gets off to quickly knocks off any must, its theme joining an orchestra with virtuoso piano and violin playing that combines the sound of a screaming newspaper headline montage with the moody nostalgia the score will also be rooted in (especially as this music was composed for the infamously cut “talking corpse” open).

Soon, Waxman takes a literally dank, haunting turn that’s more befitting a romance that would occur in an “old dark house” score of yore. And that’s exactly the brilliant idea as Waxman counterpoints the decaying romantic must of Norma’s mansion with the manly, New Hollywood life force that’s entered it. There’s a near-mean spirited quality to one of her many themes at first, its woozy quality trading off with Joe’s jazz sound. The score takes on a pre-PSYCHO feel of the ominous fate that lies for any one foolish enough to enter a foreboding domicile in “Chase and Mansion / An Aging Actress,” with Waxman further mocking Norma’s past star turn in QUEEN CHRISTINA (let alone Gloria Swanson’s real footage of her role in it) with a tango theme It’s an exotic descent into madness that befits both a forgotten movie star and her once-famed exotic character, a melody that will get its fullest, and most infamous rendition as Norma walks down the staircase for BLVD.’s finale in “The Comeback.”

Though there’s no small amount of twisted musical bullying in BLVD., Waxman also ends up exhibiting a tender understanding, and even sympathy for Norma. “Afternoon Outings / Sacrifice of Self-Respect” might start out with comic spookiness as Joe’s sax rapidly finds himself becoming an enabler to Norma’s delusions. But just as quickly Waxman’s lush orchestra is reveling in her thoughts of yesteryear.

SUNSET BLVD. brilliantly does this bait-and-switch of humor and real feeling, with drunken jazz kicking Joe when he’s down in “After Aulde Lang Syne / The Pampered Prince,” or using a jaunty theme in Norma’s return to the studio, which sounds like it might as well be Babylon in “Parading To Paramount.” Yet violins movingly play her disappointment in “Interview with DeMille,” with her former director’s sadness for her time-lost soul reflected in “DeMille’s Compassion.” Waxman brilliantly brings the score’s emotional shades together for “Farewell / Joe Walks Out,” a sweet violin solo segueing into her mad tango. Norma’s parting with the gigolo reaches Wagnerian heights of jilted passion before the music winds out of control, with all roads for the swooning sound of old-school Hollywood scoring and new-fangled jazz ending up with an outraged orchestral pronouncement for the pistol shot that sends Joe face-down into the drink of Norma’s pool.

SUNSET BLVD.’s release at the end of 2010 helped ring out a banner year for long-awaited releases, a couple of them priced, and packaged in lovingly excessive ways that no doubt sent some fans to the poor house. But Counterpoint’s 25 semolian soundtrack of what’s arguably one of the greatest scores ever produced in Hollywood is a textbook example of giving fans what they want, in a way that they can afford, thanks to album producers Craig Spaulding, Lukas Kendall and Neil S. Bulk. They’ve done a bang-up job of collecting the surviving score and source music of SUNSET, including the horrorshow organ playing of Bach’s “Toccata and Fugue in D Minor” (after all, what haunted house would be without it?), the famed tango “La Cumparista,” the standards “Diane” and “Auld Lang Syne” and the sound effects-and-all main title whose sirens take us on their way to fish out Joe.

Perhaps the biggest additional highlight is the two-and-a-half minute song that gets its own disc (at no discernable extra cost). The first-ever recording of the never-before-heard “The Paramount-Don’t-Want-Me Blues” is a delightful party tune where Joe summed up his studio cynicism. Singer Whitney Claire-Kaufman and pianist Nelson Kole have delight in the kind of pre-Shaiman satire that would likely have gotten original songwriters Jay Livingston and Ray Evans in a whole lot of trouble with the Hollywood powers-that-be back then. And where most releases would be happy to just give you one lavishly appointed set of liner notes, this final spin down SUNSET BLVD. offers two excellent, art-filled booklets wherein film and music historians Ryan Brennan, Curt Hardaway and Rachel Segal elucidate on this acerbic masterpiece, and its score’s place in finally putting the stake through the silents. To those who regard movies as being better before the talkies came in, there’s no better insult, or perhaps a way of confirming they were right than the renewed strains of this masterpiece of post-ironic scoring.

Get ready for your Waxman close-up HERE.